Pioneering Deep-Sea Robot Is Lost to a Watery Grave 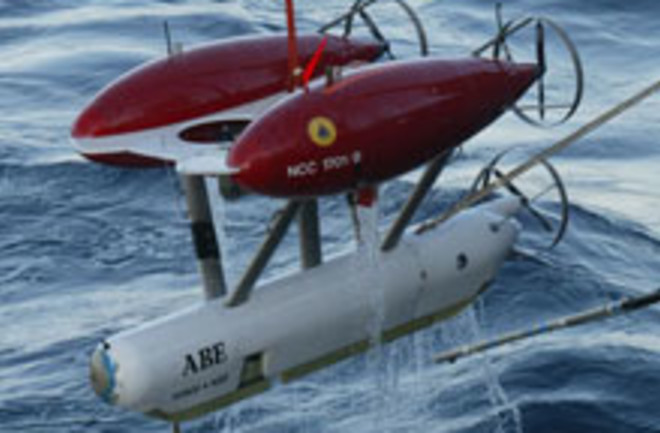 A pioneering deep-sea robot, which could function unmanned and untethered to a surface ship, was lost at sea this week. The loss of the 15-year-old Autonomous Benthic Explorer, or ABE, comes as a blow to scientists who study the ocean's floor. ABE could stay under water for an entire day; it ventured

into some of the most remote and risky places on earth, making detailed maps of mid-ocean ridges and was the first autonomous vehicle to locate hydrothermal vents [The Boston Globe].

That's why it earned a spot on Wired magazine's list of "The 50 Best Robots Ever." ABE was on its 222nd research dive, studying a hydrothermal vent it had discovered off the coast of Chile on the Pacific floor, when all contact was lost with its surface vessel Melville. Scientists suspect that one of the glass spheres that helped keep ABE buoyant imploded. Scientists at the Woods Hole Oceanographic Institution, who designed and built the $1 million vehicle, believe that this implosion--almost two miles undersea and under pressure of more than two tons per square inch-would have caused other spheres in ABE to implode, destroying on-board systems and leaving the robot stranded at the bottom of the ocean floor. At the time of its loss, ABE, who was brought out of retirement as its replacement Sentry was on another expedition, was researching the Chile Triple Junction--

. Scientists and engineers on the ABE team reported that after a smooth launch, the final dive started normally. “ABE actively homed to its assigned position, reached the seafloor, released its descent weights, then leveled off to check its ballast. After this point, we received no more acoustic returns from the vehicle on either of its two transponders,” they said. This is when they think they lost ABE. Scientists clarified that this incident had nothing to do with the earthquake activity off the coast of Chile. ABE was first launched in 1995 and revolutionized deep sea research; it was the precursor to today's most sophisticated autonomous underwater vehicles (AUVs). The unmanned, untethered ABE roamed the ocean floors easily, as it was programmed to maintain a designated course but also to avoid on-course collisions. While navigating some of the most treacherous territory on earth, ABE made detailed maps of mid-ocean ridges and

the 40,000-mile undersea volcanic mountain chain at the boundaries of Earth’s tectonic plates where new seafloor crust is created. It was also the first AUV to locate hydrothermal vents, where hot chemical-rich fluids spew from the seafloor and sustain lush communities of deep-sea life. ABE explored seamounts, undersea volcanoes, and other areas with harsh, rugged terrain [Woods Hole Oceanographic Institution].

“Abe was a vehicle that we’ll always have fond memories of— it was a world-beater in its day… In a way, it’s fitting that its demise comes on the job, and that it has gone to be recycled through the Chile subduction zone” [Nature blog].