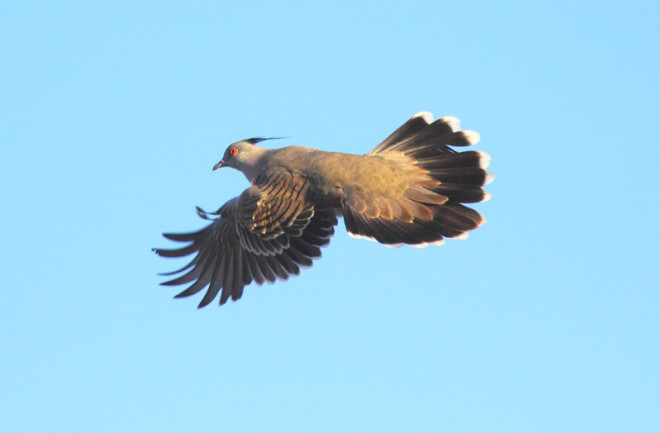 When the crested pigeon of Australia flees potential foes, it can raise an alarm — not by calling out vocally, but with whistling feathers in its wings. These new findings may be the first proof of an idea Darwin proposed nearly 150 years ago suggesting that birds could use feathers as musical instruments for communication.

Birds are known for the songs they can sing, but many can also generate unusual noises with their feathers. Darwin called these sounds “instrumental music” in his 1871 book exploring the role of sex in evolution. For instance, “peacocks and birds of paradise rattle their quills together, and the vibratory movement apparently serves merely to make a noise, for it can hardly add to the beauty of their plumage,” Darwin wrote.

Feathers are known to produce distinctive sounds in at least 70 different species of birds, with many of these plumes possessing highly modified structures apparently specialized to make these noises. However, it was difficult to prove whether birds communicated with each other with these sounds.

For instance, scientists have long known that crested pigeon wings whistled when the birds flew. However, one could argue these noises were “unintentional byproducts of flight, rather than signals that have evolved for communication,” says study lead author Trevor Murray, a behavioral ecologist at Australian National University in Canberra.

To see whether the whistling feathers of crested pigeons were indeed alarm signals, Murray and his colleagues recorded video and audio of crested pigeons in open parks and suburban gardens in Canberra, where they are abundant. Crested pigeons flee to cover for a safe vantage point upon detecting predators or hearing the wings of their compatriots.

The researchers also trimmed specific feathers in the wings of the birds to see how that influenced the sounds they made and the responses they prompted. Murray stressed that “these birds molt every one of their primary feathers each year, so they are used to flying around with a several feathers missing.”

The crested pigeon’s unusually narrow eighth primary wing feather produced a distinct high note with each downstroke. This sound changes as the birds flap faster, so those that flee danger produce wing sounds with a higher tempo.

“Since this alarm signal is produced only when the bird flees — the wing sound when fleeing is louder and has a faster tempo — it is actually innately reliable,” Murray said. “They can’t help but warn their neighbors when they are trying to escape.”

The crested pigeons generate alternating high and low notes in flight, with the high notes coming from the eighth primary wing feather and the low notes from the ninth one. However, playback experiments showed that only the high notes were key to sounding an alarm.

These findings are “a first of a kind in many ways, and gives me a sense of pride in these cool little birds, with their quiet voices and loud wings,” Murray said.