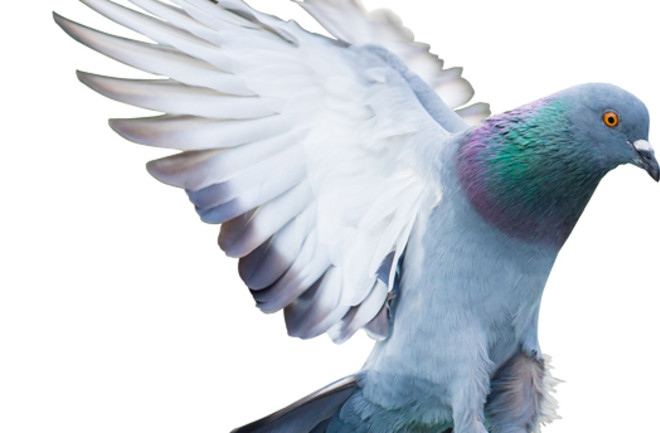 Often dubbed “the rats of the sky,” pigeons have a bad — but mostly unearned — rap in modern society. Despite the stigma, these birds have some impressive skills.

Birds of a Feather

Pigeons refuse to be pigeonholed. They come in an eccentric array, with around 350 recorded breeds. All are part of the family Columbidae, which also includes doves. Here are some of the most popular traits these birds are bred for.

Utility: Many pigeons are bred as a food source in the U.S. and elsewhere.

Special Skills: Some birds are selected for their abilities, such as homing pigeons, which have an incredible knack for finding home. Or there are flying tumblers and highflyers, which can roll over backward in flight — perfect for flying competitions and shows.

Display: Other pigeons are bred for superficial looks. This includes color pigeons, which have remarkable coloring and markings; pouters and croppers, which inflate their crop to look like they’re puffing their chests; frills and owls, which sport stunted beaks and outlandish chest feathers; and Asian feather and voice pigeons, which have fancy feather-growth patterns and strange laughs or voices.

Some of our favorite looks A7880S/Shutterstock

Crop: Pigeons are one of only three avians that have a crop, an enlarged extension of the esophagus used to produce a nourishing secretion for their young.

Beak: When most other birds drink, they throw their heads back to swallow. Pigeons suck up water, using their beaks like straws.

Wings: Pigeons’ wing muscles are about 60 percent of their total body weight, more than most other birds, making them strong fliers. They can cover about 500 miles a day at speeds up to 50 mph.

The uncanny intelligence of pigeons has been an obsession of many scientists. In the 1950s, psychologist B.F. Skinner, known for his work on learning and behavior, taught the birds to play pingpong. He also trained them to guide missiles through the sky by pecking at a screen when they saw the weapons’ intended targets. But military officials were skeptical of the feathered pilots’ reliability and accuracy, and scrapped the idea.

Still, the birds are one of the few species to pass the “mirror test,” which assesses a critter’s ability to recognize its own reflection, indicating it has a concept of self. Only about six other animals have this ability. Pigeons also beat out babies and toddlers in recognizing the letters of the alphabet and understanding categories. They can even distinguish different human faces and understand certain facial expressions.

And harkening back to their missile-guiding days, in 2015, scientists trained pigeons to spot cancer in medical images, providing keen insight into how to improve cancer screening technologies.

It’s no secret these avians are adept at finding their way home — a skill known, fittingly, as homing. But how they do it still stumps experts.

Some scientists think pigeons navigate using Earth’s magnetic field. In 2012, a group reported that when pigeons were exposed to magnetic fields, certain brain-stem cells for their inner ears activated. The scientists theorized these cells could signal the direction, intensity and polarity of our planet’s magnetic field, giving pigeons a built-in GPS.

Because pigeons have sensitive hearing and remarkable memory, some experts suspect the fliers actually create sound maps, allowing them to navigate using specific audio signatures as landmarks. Other research suggests they use the sun, certain environmental cues or even their sense of smell for direction. And yet another camp claims the birds can actually follow roads. Maybe one day we’ll home in on the answer.

A Flight Through History

The closest living relative of the now-extinct dodo, pigeons supposedly originated from the Mediterranean, India and the Middle East. Now they live everywhere except the Sahara Desert, Antarctica and the high Arctic. Our shared history dates back further than you’d think.

About 10,000 years ago: The first hints of human-pigeon interactions date back to the Pleistocene era. Although evidence is scant, archaeologists believe our ancestors bred them for food.

About 5,000 years ago: The first proof of pigeon domestication appears in writings etched in ancient Mesopotamian cuneiform tablets and Egyptian hieroglyphics.

About 4,500 years ago: Records of pigeons performing special duties — as food, messengers and sporting targets — start showing up in ancient Mesopotamia. Even their droppings are used as ingredients in fertilizer and gunpowder.

1800s: Businesses such as Reuters News Agency in Germany use the birds — more reliable than telegraphs and faster than any transportation of the time — to carry communications about breaking news and the stock market. In 1855, Charles Darwin begins studying and breeding pigeons, informing his book, On the Origin of Species.

1900s: In both world wars, pigeons fly messages from the front lines to headquarters. A few even become war heroes for ferrying critical messages that shape the outcome of battles. In 1940, many countries deploy camera-laden pigeons to capture above-ground imagery.

2000s: Nowadays, we use pigeons for biology and anatomy lessons — mostly. In May 2017, authorities intercept pigeons carrying bird-sized backpacks full of drugs across national borders.