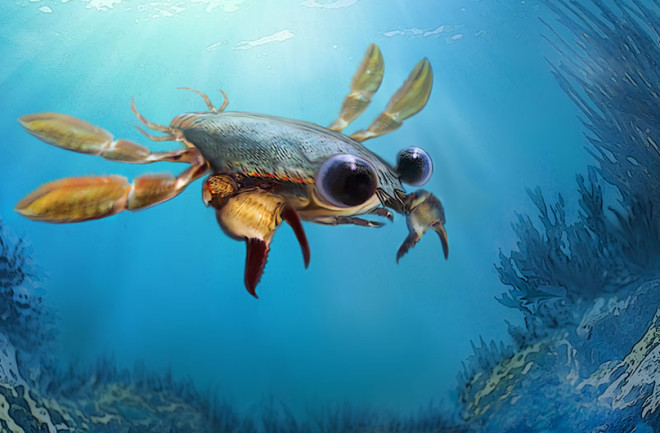 Reconstruction of ancient crab called Calichimaera perplexa. (Credits: Oksana Vernygora, University of Alberta) (Inside Science) -- A newfound fossil that scientists described as perplexing, beautiful and the platypus of the crab family is now shedding light on how its crustacean relatives evolved, a new study finds. Paleontologists examined more than 70 exceptionally well-preserved specimens of the entirely new branch of the crab evolutionary tree, along with hundreds of fossils of shrimp and other kinds of crustaceans, from deposits in Colombia and the United States that are 90 million to 95 million years old, dating back to the Cretaceous Period. They named the new species Callichimaera perplexa, which translates into "perplexing beautiful chimera." Like the mythical chimera, which combines features from a lion, goat and snake into one body, C. perplexa combines traits from several extinct and living crabs, and from different life stages of crabs. For example, its long body, exposed tail, leglike mouthparts, bent claws and compound eyes unprotected by sockets are typical of the larval stage of development but appear to have been retained into adulthood. At the same time, the animal's broad and keeled sternum and paddlelike front legs are the kinds of adaptations early crabs used for active swimming. The "unique and strange" mosaic of features seen in C. perplexa "makes it an analogue to platypuses," said study lead author Javier Luque at the University of Alberta in Canada and Yale University in New Haven, Connecticut. In terms of its lifestyle, C. perplexa was at most 1.6 centimeters long, or about the size of a quarter, but its large eyes and powerful, oarlike legs suggest it was potentially a nocturnal predator. A number of larval traits seen in this crab appear retained and amplified in the adults via changes in the timing and rates of its development. These findings shed light on the mysterious evolution of the crab body plan, with its broad carapace and small tail tucked under the animal's body. The plan appears and disappears many times in both true crabs and "false crabs" such as hermit crabs and king crabs, and is thought to help them move quickly and hide in crevices and under rocks to avoid predators. In contrast, C. perplexa reveals that early crabs may have adopted a diversity of forms during the Cretaceous, perhaps because other crustacean groups went extinct at that time, opening new lifestyles for crabs to evolve into. Given how tropics nowadays are cradles of biodiversity, it makes sense that the ancient tropics where C. perplexa lived may have also supported unusual evolutionary variations of the crab body plan. "In paleontology, more often than not, reality surpasses fiction!" Luque said. The scientists detailed their findings online April 24 in the journal Science Advances. [This story was originally published on Inside Science]