Perhaps zebra stripes have nothing to do with avoiding lions after all! 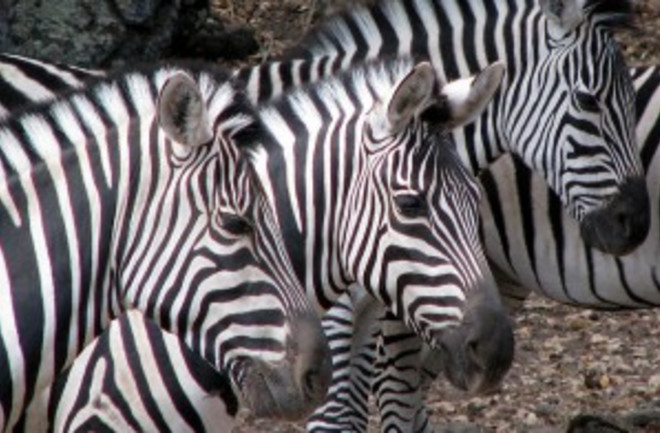 The striking patterns of zebra stripes have puzzled evolutionary biologists for a long time. And there are a number of hypotheses out there for why zebras have evolved their signature stripes, from allowing them to hide in grass or visually confusing predators (dazzle camouflage) to helping reduce biting by insects. Here, scientists test the idea that zebra stripes actually help with cooling: "This hypothesis is based on the idea that black and white stripes would heat up differentially, thus causing differential airflow between black and white stripes and creating eddies of air that would have a cooling effect. This mechanism should work most effectively on strong, contrasting stripes, so we would predict good coverage with bold black and white striping to occur in areas in which zebra are regularly exposed to higher temperatures."It turns out that regional temperatures, but not predator populations, can predict the intensity of the stripes found on zebras that live there (see Figure 2, below), supporting the cooling hypothesis. So there you have it: problem solved. At least for now...

How the zebra got its stripes: a problem with too many solutions "The adaptive significance of zebra stripes has thus far eluded understanding. Many explanations have been suggested, including social cohesion, thermoregulation, predation evasion and avoidance of biting flies. Identifying the associations between phenotypic and environmental factors is essential for testing these hypotheses and substantiating existing experimental evidence. Plains zebra striping pattern varies regionally, from heavy black and white striping over the entire body in some areas to reduced stripe coverage with thinner and lighter stripes in others. We examined how well 29 environmental variables predict the variation in stripe characteristics of plains zebra across their range in Africa. In contrast to recent findings, we found no evidence that striping may have evolved to escape predators or avoid biting flies. Instead, we found that temperature successfully predicts a substantial amount of the stripe pattern variation observed in plains zebra. As this association between striping and temperature may be indicative of multiple biological processes, we suggest that the selective agents driving zebra striping are probably multifarious and complex."