Peering Into Trilobite Eyes to See the Evolution of Vision 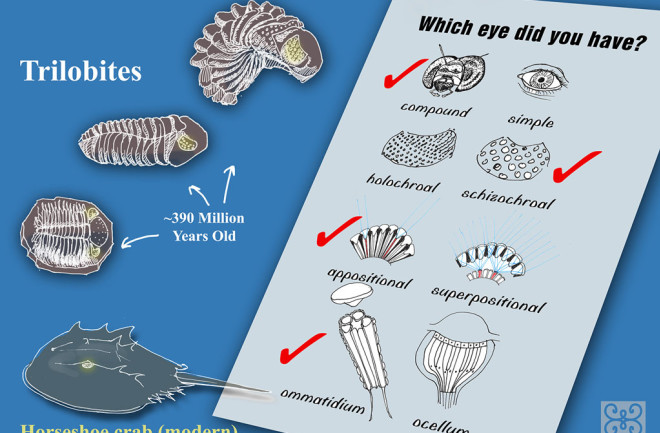 They might not seem like the most expressive eyes you've ever seen---but the beady eyes of extinct trilobites have a lot to say. Recently, they've given us some new insights into the evolution of vision.

Trilobites are one of the first animals in the fossil record to develop complex eyes (as opposed to the light-sensitive spots that passed as early eyes). So understanding trilobite vision is also understanding the origins of eyes themselves. It has even been hypothesized that trilobite vision drove rapid changes in their prey's body structure as prey evolved to escape sighted predators, thus fueling the Cambrian Explosion.

Trilobites had compound eyes, akin to those of today's insects and crustaceans. We know that because trilobites' lenses were made of calcite, so they often fossilized along with the rest of the trilobite's exoskeleton.

But underneath the lenses were sensory cells, which wired vision up to the brain. Those sensory cells, like other soft tissue, rarely fossilize. Thus, seeing how trilobites' eyes were wired into their brains has been impossible up to now.

But a fluke of fossil preservation, along with some state-of-the-art technology, has now allowed scientists to see inside the trilobite eye. It turns out, bacteria that settled on the trilobite's remains set down a thin layer of minerals on the surface of the eye, researchers reported last month in Scientific Reports. This trace shell persisted even after the cells themselves decomposed.

Using one of the most high-powered X-ray machines in the world, researchers were able to see these fossil remains at a cellular level, and map the trilobite's entire visual system for the first time.

The findings indicate that trilobites had apposition eyes. Apposition eyes are the most common form of eye, and are likely the ancestral form of the compound eye. Many of today's insects have both appositional eyes (more advanced, compound eyes) and ocelli (simple eyes that mainly sense light). But some arthropods, like spiders, make their entire eye out of ocelli.

That makes the closest living analogue of trilobite eyes the eyes of the horseshoe crab Limulus. Limulus is generally regarded as a "living fossil," and thus may have retained this ancient visual system. Fine-scale studies of other trilobites' eyes may help us map the critters' evolutionary tree and better understand where and when the first eye developed, and how they led to the wide range of eye types we see in animals today. Something to think about next time you gaze deeply into the eyes of a horseshoe crab.