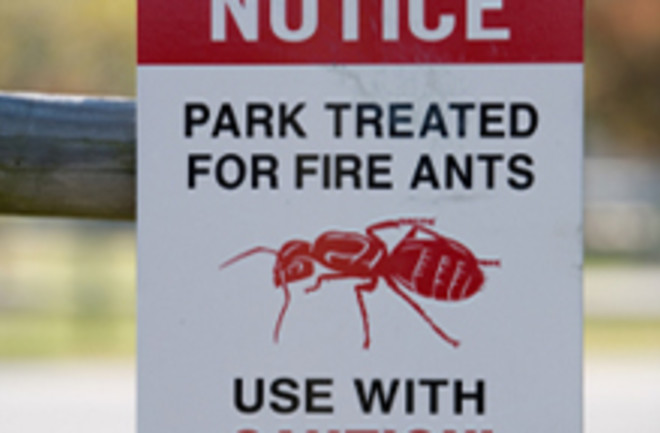 Scientists may finally be on their way to controlling the pesky fire ants that have invaded the American South: They're releasing swarms of parasitic flies that first turn the ants into zombies and then decapitate them. The non-native ants are at the top of scientists' hit lists because they cause

an estimated $1 billion in damage in Texas each year. The insects swarm on circuit breakers and other electrical equipment, damaging them severely. Swarms of the stinging insects can also severely injure humans and can kill smaller animals, such as calves and pets, that stumble across nests [Los Angeles Times].

Over the past ten years, Texas agricultural researchers have begun releasing several species of phorid flies, imported for this task from the South America.

The flies "dive-bomb" the fire ants and lay eggs. The maggot that hatches inside the ant eats away at the brain, and the ant starts exhibiting what some might say is zombie-like behavior.... "There is no brain left in the ant, and the ant just starts wandering aimlessly. This wandering stage goes on for about two weeks" [Fort Worth Star-Telegram]

, says researcher Rob Plowes. Eventually the ant's head falls off and the mature fly emerges, ready to lay its own eggs in a new round of ants. Plowes explains that

fire ants first emigrated from Argentina to Mobile, Alabama, in early 1930s, probably on an agricultural-produce boat, then began moving through Texas around 1950. "They're still spreading," Plowes said. There's a "huge history of efforts to remove the ants, ranging from physical removal to pesticides and, most recently, biological control," Plowes added [National Geographic News].

The phorid fly species imported thus far have only attacked ants around their mounds, but a new species set to be released this year will target ants on their foraging trails.

The phorid flies have never been found to attack native ants, preferring to dine only on their South American hosts [Los Angeles Times].

While the flies aren't expected to zombify every fire ant in the state of Texas, any reduction in numbers they can bring about will be greatly appreciated, researchers say.

"It’s a tool — they’re not going to completely wipe out the fire ant, but it’s a way to control their population," said Scott Ludwig, an integrated pest management specialist [Fort Worth Star-Telegram].