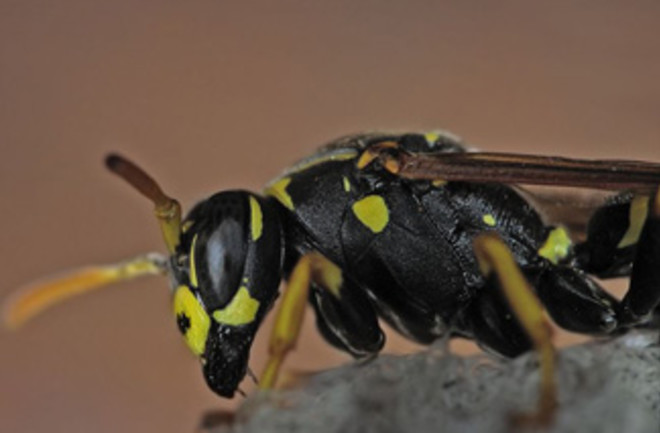 Parasitic wasps have a terrifying but weirdly impressive knack for taking over the bodies and brains of other many-legged creatures, making spiders weave them bespoke silk cocoons, obedient cockroaches incubate their eggs, and paralyzed, partially devoured ladybugs guard their young. But for the European paper wasp, as a new study describes, the tables are turned: It's the host rather than the parasite---and the things the Xenos vesparum fly larvae inside it lead it to do are at least as odd as any of the above. Brandon Keim at Wireddescribes the saga in all its bizarre detail. Particularly striking is the fact that the larvae make the wasps they live in disregard their spot in the strict wasp social order. While the infected wasps start out as workers, they spend all winter chowing down and hanging out with the queens of other colonies:

“The parasite is triggering a queen behavior, but you can’t say they’re really queenlike, because they’re not reproductive,” said [entomologist Fabio] Manfredini. Come spring, the real queens go off to prepare nests, but infected wasps stay behind, waiting. Inside them, gestation is nearly complete. Then, with exquisite timing, the wasps depart. Some search out foraging areas, leaving X. vesparum larvae like traps underneath leaves. Others return to their colonies at mid-day, when the real queen is out foraging, and while colony-defending workers have yet to mature. “After that, they start wandering among the colonies,” spreading their deadly larval load, said Manfredini. “They don’t lay eggs. They don’t build colonies. They’re completely anarchic.”