Weighing in at only 40 grams, brown mouse lemurs are one of the smallest species of primate in the world. Their diminutive size as well as their nocturnal, tree-dwelling lifestyle makes them difficult to track and observe. It would have been completely understandable if Sarah Zohdy, a graduate student at the University of Helsinki, had simply given up her quest to understand the social structure of these elusive creatures — but she didn't. Instead, she and her colleagues came up with an ingenious way to study the interactions of these small lemurs: they followed their lice. 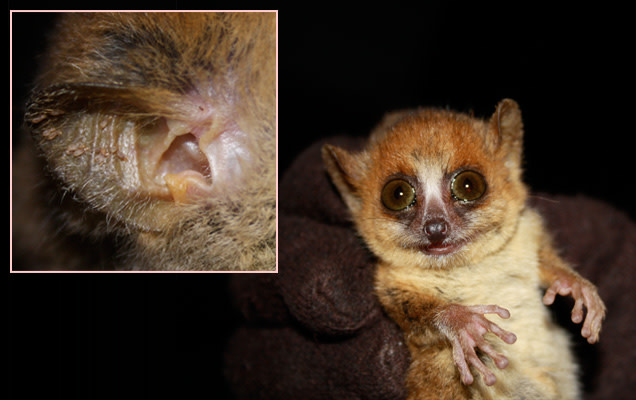 For as long as there have been mammals, there have been lice. Though it's hard to find lice in the fossil record, scientists have estimated that the group originated at least 130 million years ago, feeding off feathered dinosaurs, though they now live on just about all species of birds and mammals. Lice tend to be very host-specific, meaning they only live and feed on one species or a set of closely related species. Furthermore, lice can only survive a limited time without their hosts, and must quickly find a new one if they leave or are forcibly removed. This means that for lice to reproduce and spread, their hosts have to be in fairly close contact (like, as many parents know, kids in a kindergarden classroom). In wild species, lice rarely switch hosts unless the animals interact physically, whether through wrestling, nesting together or mating. It was that requirement for close contact that made Zohdy and her colleagues think they might be an ideal proxy for investigating social interactions that can't be viewed directly. They had already been collecting data on the mouse lemur populations in Madagascar using traps to monitor their movement. But while the researchers knew certain lemurs spent a lot of time together if they were caught together in traps, the researchers figured they were probably missing a good amount of social interaction. So, they decided to follow the lemur's lice as well. Mouse lemurs are parasitized by a particular species of louse, Lemurpediculus verruculosus, which feed off the lemurs' blood. The researchers were able to track the transfer of these lice between lemurs by tagging lice with a unique color code using nail polish, so they could tell what lemur each louse started on. Over time, they continued to trap lemurs and look at their lice to see if any of the tagged ones had switched hosts. In total, they tracked 76 transfers between 14 animals — all males — over the course of a month, which happened to be during the breeding season. The researchers hypothesized that the male-only transfers likely occurred during fights over females. But perhaps more interestingly, the lice data only supported 8 of the 28 expected social interactions predicted by trapping data, and found 13 new ones, suggesting the louse marking technique was able to uncover lemur social activity that the researchers have never observed. They also found that some animals shared more lice than others. Sarah Zohdy explained, “The youngest male in the study had the worst louse infestation, but only donated one louse, indicating a low number of interactions, while the eldest male, who also had a heavy infestation, appeared to be more sociable, collecting lice from many donors. Other males appeared to be ‘superspreaders’ donating but not collecting lice." The lice also revealed that lemurs travel more than the researchers had thought. "Most of the louse transfers occurred between lemurs over 100 m from each other, and one transfer spanned over 600 m," the authors write. "The transfers therefore demonstrate a degree of lemur ranging far greater than anticipated." Overall, these data provide new insights into the social interaction of mouse lemurs as well as the relationship between the lice and their hosts. This isn't the first study that used lice to look at a bigger scientific picture. Because of their host-specific nature, scientists have used them to map ancient speciation events, and even determine when humans first wore clothes. But never before have lice been used to study behavior in a living wild species, though the team hopes their study shows the usefulness of this technique. "The approach developed here has potential for application in any species parasitized by sucking lice, including the many trappable species of cryptic, nocturnal, subterraneous or otherwise elusive mammals in which host social contact and parasite exchange data are difficult to obtain."