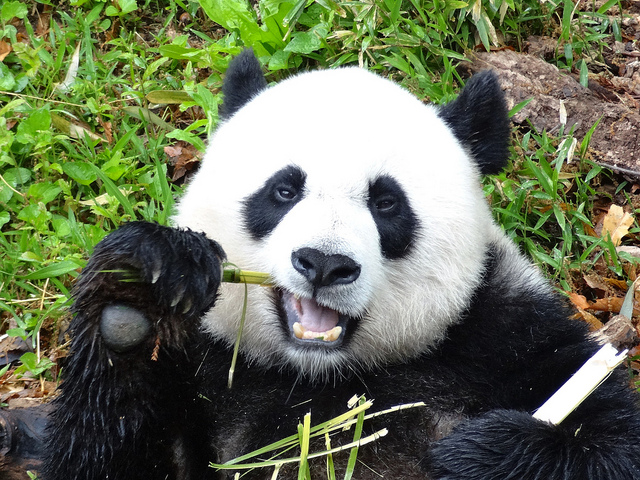 A change in seasons can mean it's time to take the sweaters out of the back of your closet, plant your garden, or—if you're a panda—remake your gut microbiome. Scientists have found that pandas, rather than a summer and winter wardrobe, have different sets of gut bacteria for different seasons. The rotating roster of bugs helps pandas make the most of their drab diet of bamboo, bamboo and more bamboo. The panda menu does have seasonal variations. Pandas munch more on different bamboo species, and different parts of the plant, as their availability changes during the year. In humans, dietary changes are known to affect our gut microbiome—which makes sense, given that the bacteria living in our intestines eat what we eat (and sometimes help us break it down). Dietary changes in monkeys and mice have also been linked to changes in the bacterial species living in their guts. To find out whether seasonal changes in the panda's diet affect its gut microbes too, Qi Wu of the Chinese Academy of Sciences in Beijing and coauthors went to the mountains to track down some panda poop. The researchers gathered their samples in Foping Nature Reserve, in the Qinling Mountains. There, they've been monitoring seven giant pandas wearing GPS collars for more than a decade. They tracked the pandas closely in 2012 and 2013 to collect 30 fresh fecal samples, leaving off any part of the poop touching the soil (since they wanted to study gut bacteria, not dirt bacteria). They also sampled bamboo plants throughout the year. Like pandas that scientists have observed in other areas, these pandas ate differently across the seasons. From September to April, they ate the leaves of Bashania fargesii bamboo. From May to July, they ate the shoots of that plant, along with the shoots of Fargesia qinlingensis bamboo.In August, a transitional season, they ate the leaves of both plants. Chemical analysis showed that the leafy diet of fall, winter and spring included lots of fiber and sugar. The shoot-heavy diet of summer provided pandas with more protein. With these seasonal changes in diet came changes in gut microbes. Analyzing the bacterial DNA in the pandas' feces, the researchers found a "richer and more diverse" microbiome during the summer shoot-eating season. In the leaner, leaf-eating days, the gut microbiome was also leaner. But, looking at the bacterial genes themselves, the researchers saw that the microbes living in pandas' guts during leaf season made more enzymes for breaking down fiber. The authors think the panda's changing microbiome, which adjusts to the nutrients available in different seasons, is just one of the animal's adaptations to its boring all-bamboo diet. Until the panda makes a New Year's resolution to try some new foods, this may be the next best thing.