Longer than any NBA player is tall, S. geographicus cruised around with some serious armor. 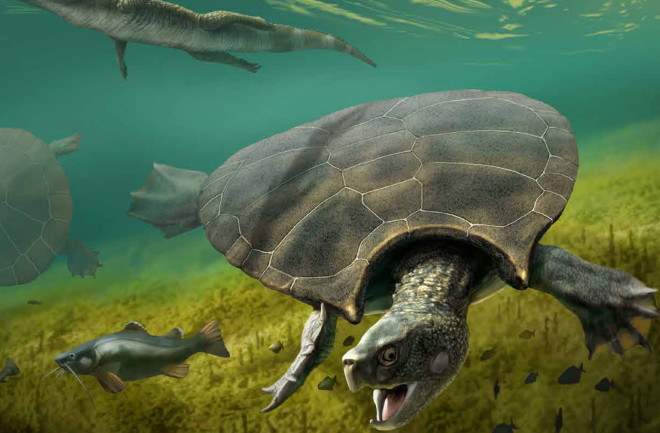 Since the 1970s, scientists have pulled bits of fossilized turtle shells from the ground in Central and South America. These were no ordinary hard cases: These shells were impossibly long, indicating turtles stretching about 8 feet from tail to tip.

What else this massive turtle looked like, or how it behaved, remained mostly a mystery for decades. But thanks to a new analysis of the animal's various remains — and the discovery of the longest complete shell yet — paleontologists now have a better idea of how this megaturtle, called Stupendemys geographicus, navigated the marshy Americas 13 million years ago.

Described in the journal Science Advances, the longest S. geographicus shell ever found is over 9 feet long. Massive horns protruding from the front of the shell might mean that male turtles got into fights. And the jawbone found alongside it let paleontologists draw up theories about what the freshwater beast ate, including other reptiles. “For many decades, it was this forgotten species,” says Edwin Cadena, a paper co-author and paleontologist at the Universidad del Rosario in Colombia. “And we’re bringing it back to life with fascinating specimens.”

Colombian paleontologist Edwin Cadena takes notes from one of the male specimens of Stupendemys geographicus during a fieldwork session in 2016. (Credit: Rodolfo Sanchez)

Back when S. geographicus was paddling through freshwaters, Central and South America looked very different, Cadena says. The region of modern-day Brazil, Peru and Colombia kind of looked like Floridian marshes. The widespread nature of their habitat was ideal for this megaturtle, Cadena says.

But 5 million years ago, geographic features changed. The beginning of the Amazon River had started to trickle through, and habitats were becoming smaller and more specific. “So if you’re really large, and your space is decreased, you’ll be under a lot of pressure and stress,” Cadena says. S. geographicus couldn’t handle the constraints, and now paleontologists dig up their remains across the region.

Cadena and his colleagues pooled all the evidence with their latest find, including the 9-foot shell and it’s accompanying jawbone, to paint a more complete picture of how this turtle lived. The jawbone, for example, comes to a point in the front. Modern-day turtles with that same jaw shape eat fish, snakes, crocodiles and even other small turtles, Cadena says. A flat bone in the center might have helped the reptile crack mollusks and snails as well.

It’s possible the turtle was someone’s prey, too. Crocodile experts studying scratches found on several shells think they match the grooves left by the beasts when they try and hunt turtles today, Cadena says.

And horns protruding from the front of some shells also bear gouges, but those don’t appear to be from crocodile scratches. Instead, Cadena and his team think those cuts are from males fighting other males. Some of these horns, which flank either side of the turtle’s neck, are nearly a foot long. “Just the horn is similar to the regular size of many living turtles today,” Cadena says.

Additionally, the shells come in roughly two sizes, with the horns only on the bigger set. In other species, like tortoises, males are both larger and equipped for territorial fights. A similar sex-based combat ability could have played out among these megaturtles, too, Cadena says, though the horns also could have been useful stores of calcium.

“It's always fascinating to just imagine this animal living,” Cadena says. Shelled beasts of this size were cruising through the region’s freshwater millions of years ago — which means that no matter what’s happening today, countries in the area have something in common. This international collaboration to understand S. geographicus, Cadena says, “is showing the scientific community that we can work together on a project that is our history.”