Recent findings show the dinosaur may have been more comfortable in water than on land. But a full skeleton has never been found. 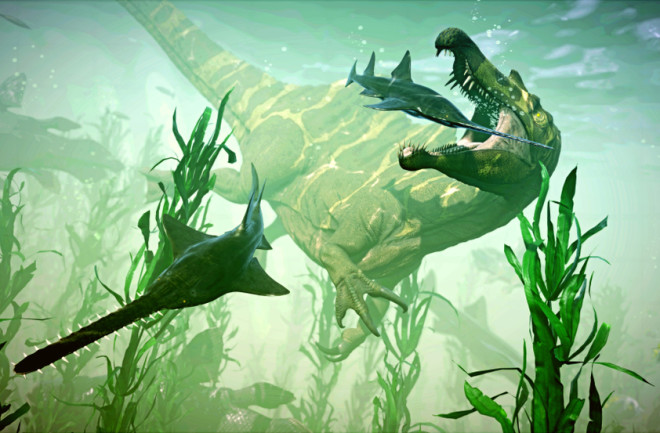 An artistic depiction of Spinosaurus on the hunt. (Credit: Herschel Hoffmeyer/Shutterstock)

Spinosaurus is a dinosaur that breaks the rules. From the tip of its crocodilelike snout to the end of its paddle-shaped tail, this enormous predator was more comfortable sculling around Cretaceous lakes than stomping after prey on land. No other carnivorous dinosaur that we know of lived like this.

But Spinosaurus is still changing. Our understanding of the water-loving beast is pieced together by scattered remains, and a full skeleton of the animal has never been found. Its image has morphed again and again over the decades as paleontologists slowly uncover details from its far-off past — most recently, the fossil of an oar-shaped tail, which confirmed suspicions that the creature was more active in water than on land.

“The look of Spinosaurus changed a lot [over the years], due to scanty finds and difficulty in comparing anatomical parts from different specimens and species,” says Milan Natural History Museum paleontologist Cristiano Dal Sasso. While the first fossils were discovered over 100 years ago, other pieces of Spinosaurus — such as vertebrae, jaw bones and tail bones — have been excavated since.

But how those parts to relate to each other, and what they say about Spinosaurus, has become increasingly debated. Piecing together a clear picture of the species’ life and appearance is an anatomical quest that spans more than a hundred years. Each new find underscores the fact that paleontologists are only just beginning to understand the strangest of dinosaurs.

In 1912, fossil collector Richard Markgraf excavated the bones of an unusual animal from the Cretaceous rocks of Egypt. He sent the findings to German paleontologist Ernst Stromer, who recognized that the bones belonged to a new animal: a dinosaur with a sail on its back and cone-shaped teeth in its jaw. In 1915, Stromer formally named the creature Spinosaurus aegyptiacus.

But the dinosaur’s remains were soon to be obliterated. Spinosaurus was held at the Bavarian State Collection of Paleontology in Munich, which was devastated by an Allied bombing strike in 1944. Spinosaurus, and a second specimen Stromer called Spinosaurus B, were destroyed.

Despite the loss of its only known remains, Spinosaurus became a celebrity species, often featured in books and as toys. It would take another four decades before paleontologists would find any more of the dinosaur’s bones.

In 1986, paleontologists Alan Charig and Angela Milner described an animal related to Spinosaurus — Baryonyx — from the Cretaceous rocks of England. The dinosaur wasn’t anything like other meat eaters known at the time. Baryonyx had a crocodilelike snout and large claws on its hands — and was even preserved with fish in its gut, a sign that this animal likely hunted along lakes and rivers of its time. The bones reminded paleontologists of the legendary Spinosaurus.

Further discoveries in Morocco and Egypt, turned up more bits and pieces of Spinosaurus. Experts soon had additional vertebrae, bits of jaw and other pieces to work with. These finds matched up with Baryonyx and other dinosaurs dug up from South America to Southeast Asia — and nodded to species present today.

“The discovery of skull bones showed morphologies of the snout and tooth that look like those of crocodiles, suggesting similar feeding behavior,” says University of Lisbon paleontologist Elisabete Malafaia.

But what did each of these spinosaurs really look like? Many of the bones paleontologists had to work with were isolated pieces from a variety of subspecies, many of which were purchased from fossil dealers who did not take detailed field notes.

Then, in 2014, paleontologists described the first partially complete Spinosaurus skeleton found since Markgraf’s excavation. It had been discovered, dug up and sold by a Moroccan fossil dealer before the pieces were relocated and brought back together, and comprised most of Spinosaurus’ hips and legs, along with some other pieces. This specimen formed the basis of a new reconstruction that combined Stromer’s original find, the new material from Morocco and parts of other spinosaurs to fill in the gaps. The paddlelike tail, added this year by Dal Sasso and colleagues, creates a new image of a semiaquatic dinosaur that was more proficient at swimming than running.

There’s little doubt Spinosaurus spent a significant amount of time in the water. The bones of the dinosaur are extra dense, which gave it the ability to pack on bone ballast to help it achieve neutral buoyancy while swimming. Early whales independently evolved the same adaptation. The newly described tail, with its elongated spines, also appears to be an adaptation for creating thrust in the water. But despite these strides, the appearance of Spinosaurus is far from settled.

A model of a Spinosaurus skeleton on display at the National Geographic Museum in 2014. (Credit: Ryan Somma/Wikimedia Commons)

“The biggest debate about the new reconstruction of Spinosaurus is related to the fact that the fossil materials were not found articulated,” or were in a jumble rather than attached to each other, says Malafaia. It didn’t help that the private collector who excavated the legs and other parts at the site in Morocco took no notes on how the bones were situated. It’s possible that the bones belong to different individual animals, or even different species.

“This raises doubts on the proportions of the skeletal elements,” such as how small the dinosaur’s legs were compared to the rest of its body, Malafaia says.

But Dal Sasso contests this, stating that the tail was found in proximity to the other bones and that, together, they represent a single individual animal that was about 17 years old when it died. There are no duplicate bones, which would be expected if there was more than one animal, and complementary bones from the right and left sides of the animal are the same size and shape. This dinosaur had a propulsive tail, a sail on its back, a crocodilelike snout and relatively short legs for its size.

Nevertheless, there are still parts of Spinosaurus we don’t know much about. “What we really lack, still, are complete forelimbs,” Dal Sasso says, noting that a future find might change what paleontologists expect of the dinosaur’s hands and how it carried its body. What remains buried underground, and the good luck required to find such bones, will continue to change Spinosaurus.