Oysters on the Comeback in Chesapeake Bay, Thanks to Elevated Homes 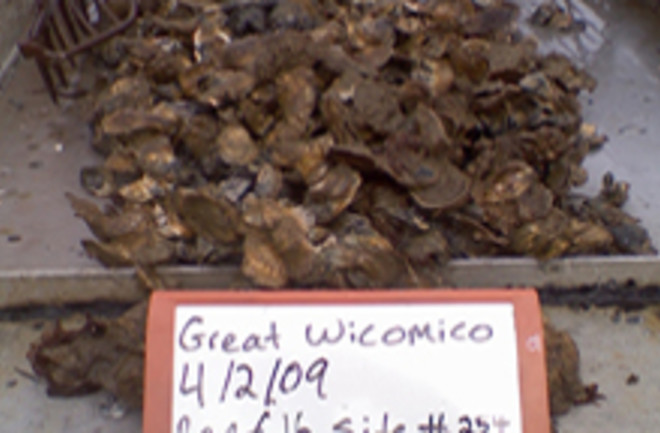 The Chesapeake Bay was once carpeted with oysters, but that was before centuries of overfishing, pollution, and disease took their toll: Today the oyster population has been reduced to less than 1 percent of its historical population. But a new restoration effort has shown unprecedented progress in bringing the bivalves back. In the Great Wicomico River, a tributary of the Bay, researchers have created a 87-acre oyster colony that contains about 185 million oysters. The Chesapeake's oyster reefs

were destroyed by centuries of watermen towing rakelike metal "dredges" and silted over by dirt flowing from the mid-Atlantic's farms and growing cities. The final blow came in the mid-20th century: A pair of new diseases killed oysters by the millions. Now, in many places, the bay bottom is a flat expanse of green mud. "Just picture, you know, a clear-cut forest," said Kennedy Paynter, a biology professor [Washington Post].

In a new study, published in Science, researchers describe the new strategy they used in the Virginia river.

They closed the area to harvesting, then in 2004 piled old oyster shells one to two feet high -- higher than previous researchers had, they said. They waited for baby oysters to latch on. The idea was to give the oysters a perch out of the dirt-choked water on the bottom [Washington Post].

Five years later, the elevated reefs have five times as many oysters as lower reefs that the researchers also constructed, which tend to sink and get covered in silt. If the success of the Great Wicomico River could be repeated elsewhere in Chesapeake Bay, it would benefit both the environment and oyster-hungry Americans.

Oysters, or bivalve mollusks, play an important role as ecological managers by filtering water. When the animals were more abundant a century ago, they could purify all the water in Chesapeake Bay ... in three days compared to a year now [Bloomberg]

, according to the National Oceanic and Atmospheric Administration. Oyster reefs also provide habitat for small fish and other sea creatures. However, some experts say that reef building is too expensive to work on a large scale, and others note

that the new populations have yet to prove they can survive now-endemic diseases. "It's very early in the game to call this a success," says Paula Jasinski [Science]