Oysters graced the Pilgrims' feast of plenty, but today few remain in the waters off Virginia and Maryland. Can they be brought back?

This Thanksgiving Day, American homes will be richly perfumed with the scent of about 47 million roasting turkeys. Given the hullabaloo over serving this traditional Thanksgiving staple, it’s logical to think there is some historical precedent for the custom—that perhaps the Pilgrims actually ate the turkey that now crowds our plates. Not so: Historians are fairly certain there must have been a game bird for the taking, but there’s no absolute evidence that it was a turkey. What historians do know is that the New England settlers invited their American Indian neighbors for a meal, and their guests, the Wampanoag, returned the favor by introducing their hosts to the native eastern oyster. From then on, oysters were a staple of the diet of early settlers. Unfortunately, their voracious appetite for the succulent little bivalve did not leave many for us. The Chesapeake Bay once teemed with so many oysters that sailing ships often ran aground on oyster reefs. This season, commercial fisheries in Virginia have yet to collect a single oyster and will probably take in an all-time low of fewer than 20,000 bushels. The state of Maryland also faces its worst harvest on record—currently estimated at a paltry 35,000 bushels. Recently, many restaurants in the bay region have even started serving oysters imported from Texas. To understand the enormity of this disappearance, consider this: In the late 1800s, 15 million bushels of the eastern oyster, Crassotrea virginica, were gathered in the Chesapeake Bay each season. Today’s harvest represents a decrease of more than 99 percent.

The fishing industry of the Chesapeake Bay has been hit hard by the population decline, but so, too, has the bay itself. Centuries ago, oysters could filter the waters of the bay—19 trillion gallons—in just one week; today, the cleaning takes more than a year. Clearly, the oyster is sorely missed—but all may not be lost. This summer, Maryland and Virginia lawmakers, led by Maryland governor Robert Erlich, proposed a vast oyster restoration project, starting in 2005, to return the oyster beds to their former fertile glory. The catch: It would employ a nonnative interloper, the Asian Crassotrea ariakensis. 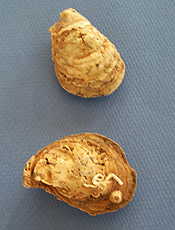 Courtesy of the Virginia Institute of Marine Science

The Eastern oyster, Crassotrea virginica, has suffered a drastic decline since the days of the Pilgrims. Policymakers now hope a massive restoration program, featuring the foreign Asian oyster, can heal the crippled oyster industry.

Ecologists are familiar with the dangers of introducing nonnative species into a new ecosystem. Without effective predators, nonnative species can overrun their environment and choke off other forms of life. They can introduce new diseases, eat other species to extinction, and otherwise alter the environment for the worse. Nobody can predict whether these things will happen if the Asian oyster is plunked into the bay—nor can anyone be sure they won’t.

“We wouldn’t want to release a nonnative oyster that harbors a disease,” says Jamie King of the National Oceanic and Atmospheric Administration, in Annapolis, Maryland, one of the federal agencies involved in oyster research in the bay. It has happened before. In the 1950s, fishermen tried to rebuild the oyster fields by introducing the Pacific oyster, Crassotrea gigas. Local fishermen introduced the new inhabitant to boost their oyster harvests, but what it did was bring a deadly parasitic infection called multinucleated sphere X, or MSX disease, which now plagues the native population.

A host of factors—overfishing, disease, habitat depletion, pollution—have contributed to the eastern oyster’s perilous state of affairs. An undisturbed oyster in the wild can live to be 25 to 30 years old. But the oldest oysters are also the largest oysters, and therefore the first choice of fishermen. By collecting the large animals, fishermen have pushed down the average age of the bay’s oyster population. The problem is not only one of demographics. Eastern oysters are naturally vulnerable to Perkinsus marinus, the parasite responsible for a disease that typically kills oysters in their second or third year of life. Scientists believe that the disease, commonly called dermo, was probably killing some oysters even before the days of the settlers. But when we started eating all the older, resistant oysters—those that had survived past the three-year mark—we created a population at risk. And the risk is not just from dermo: MSX, the disease introduced by foreign oysters in the 1950s, typically clobbers oysters that are resistant to dermo and haven’t had the misfortune of ending up in a human belly.

Hopefully, C. ariakensis, the Asian oyster now being eyed as a replacement for its cousin the eastern oyster, won’t also cause more problems than it solves. To assess that possibility and other potential risks, the states of Maryland and Virginia have asked the U.S. Congress to have the Army Corps of Engineers conduct an environmental impact assessment of the repopulation effort. (As of November 24, the request was still before Congress.)

Some researchers, including marine ecologist Mark Luckenbach of the Virginia Institute of Marine Science in Gloucester Point, are concerned that the decision to introduce C. ariakensis might be made in haste. On December 2 and 3, he and other marine scientists will convene in Annapolis, Maryland, to discuss how to determine whether the Asian oyster is suitable for introduction. “We need to know what its dispersal capabilities are, how it might affect other areas outside the bay,” Luckenbach says. Scientists, he says, are worried that the new oyster might bring more disease to the bay or grow so fast that it outcompetes the natives for resources.

The oyster introduction might not bring disease or harm the ecosystem, but that is still a far cry from success. Luckenbach estimates that between 1 billion and 2 billion native oysters might now be living in the bay. “That’s nothing,” he says. “What we need is two orders of magnitude greater. Can a nonnative that we don’t know anything about go from a population of zero to 100 billion? That’s a huge part of the unknown.”