Owls use poo and plumage to mark their territories

Owls may be are known for their trademark hooting noises, but a new study shows that they don't just rely on sound for communication. With some species having very large and sensitive eyes, you might expect that they would use visual signals too and that's exactly what a pair of Spanish biologists have found. Vincenzo Penteriani and Maria del Mar Delgado studied the eagle owl, and found that it marks its territories by recycling its meals - in more ways than one. 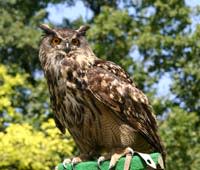 The eagle owl is the world's largest and is found in mountains and hilly forests throughout Europe and Asia. As breeding pairs prepare to raise a brood of chicks, various landmarks around their nest become streaked with brilliantly white marks that are noticeable from some distance away. Some of these are streaks of droppings ("faecal posts") and others are collections of matted feathers, plucked from dead birds ("plucking sites").

Through a series of clever observations, Penteriani and Delgado showed that these streaks are the equivalent of owl police-tape, delineating the borders of their territory and acting as clear keep-out signs to other owls.

For a start, both faeces and feathers turned up at the highest and most visible points of the valley where the duo studied the owls, and they only showed up during the months around the breeding season. If the owls failed to raise a brood, these conspicuous marks immediately disappeared and instead, faeces and plucked birds were found scattered throughout the ground, in low-lying and inconspicuous areas.

Penteriani and Delgado even tried to remove the owls' faeces by spray-painting over them with a colour that matched the underlying rocks. Within two days, the territory owners had returned and added their own fresh coat of white to the bare rock; a third of them reacted within a day.

Other studies showed that the plucking sites were also signalling posts. By monitoring the movements of radio-tagged owls, the duo found that most of them killed and ate their prey far away from the nest, outside the radius of the plucking sites, suggesting that these weren't just areas where the owls happened to land with prey. And while the owls mainly kill rabbits, none of the plucking sites had any bunny remains. Instead, they were littered with the brightest and whitest of feathers, taken from less commonly tackled prey such as egrets, magpies and indeed, other owls. The owls appear to be selecting their choice of prey very carefully, choosing only those that are most visually conspicuous.

These signals have the potential to draw unwanted attraction from predators, so it's a good job that the eagle owl doesn't really have any, and that the females are almost permanently on hand to guard the nest. In fact, Penteriani and Delgado believe that the signals are intended for other eagle owls (although they still have to test that directly).

The visuals complement the calls made by breeding owls, and have many advantages. They are permanent and long-lasting, allowing the owl to conserve its energy and to forage away from its nest in relative security. They also reduce the risk of fatal battles. In the breeding season, eagle owl couples roost together and become incredibly aggressive towards intruders. When fights kick off, they often escalate into fatal attacks, so it's in the interest of all parties concerned for one owl to avoid trespassing in another's domain.

As Penteriani and Delgado note, faeces are a very efficient communication channel because they entail a "minimal energetic cost to the signaller". In other words, you're going to produce it whatever you do, so you might as well put it to good use.