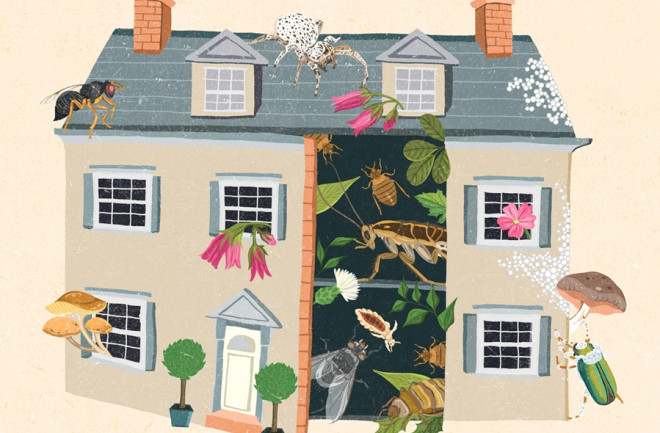 You can accept that many of the insect species around you are interesting, poorly studied and more likely to help control pests than to be them. Or you can go to war.

The modern way to wage such a fight is with chemistry. But be warned: If you decide on a chemical war, the battles are not evenly matched. Not even close. To each round of new chemicals we apply, the insects we attack respond by evolving via natural selection. The more aggressive the attack, the faster the evolution. Insects evolve faster than our ability to understand how they have evolved, much less counter it. It happens again and again, especially among those pests we try hardest to kill, such as the German cockroach (Blattella germanica).

The pesticide chlordane was first used in homes in 1948. It was so toxic to insects that it was thought to be invincible. By 1951, however, German cockroaches in Corpus Christi, Texas, were resistant to chlordane. In fact, the roaches were a hundred times more resistant to the pesticide than laboratory strains of the bug were. By 1966, some of the critters had also evolved resistance to then-popular pesticides such as malathion, diazinon and fenthion. Soon thereafter, German cockroaches were discovered that were fully resistant to DDT, which for a time was promoted by the federal government for use on farms and in households.

Each time chemists cooked up a new pesticide, it was just a few years, or sometimes just a few months, before some population of the pests evolved resistance. Sometimes, resistance to an old pesticide conferred resistance to a new one. In those cases, the battle was over before it started. The roaches spread and thrived.

Roaches aren’t the worst critters in our homes, though. Yes, they can carry pathogens, but your neighbors or children carry more. Also, experts haven’t yet documented any cases in which someone has actually gotten sick from a pathogen that a cockroach spread, whereas people get sick every day from pathogens spread by other humans. The most serious problem the bugs pose is that they are, in great densities, a source of allergens. In response to this real problem, and the many perceived problems, we have spent enormous resources trying to kill them.

The German cockroach appears to have made its way through Europe during the Seven Years War (1756-1763), a time when people were traversing Europe with containers large enough to hold quite a few cockroaches. Just who transported them is unknown. Carl Linnaeus, the father of modern taxonomy, asserted it was the Germans, but he might have been biased. Linnaeus was Swedish, and during the Seven Years War, the Swedes fought several battles with the Germanic Prussians. Linnaeus thought that “German cockroach” was a fitting moniker for a species he didn’t like.

By 1854, the insect was in New York City. It now lives from Alaska to Antarctica, having moved with peoples of nearly every nation in their boats, cars and planes. It is surprising the roaches aren’t yet on the International Space Station.

Cockroaches meet these conditions, but so do nearly all the other pests we target. Besides roaches, bed bugs, head lice, houseflies, mosquitoes and other common insects in our houses have developed resistance to our pesticides.

If a species becomes resistant to a pesticide or other means of population control, that species can readily move to another home that uses the same control measure. In rural environments, the spread of resistant species might be slow. But in cities, it can happen rapidly because apartments and houses are closer together. Even though human social networks often fall apart in cities, with people feeling lonely and isolated, the resistant pests stay connected. Their network is a kind of river of our own making, and it flows through our windows and under our doors.

Although resistance is quick to evolve among the pests, it is less likely to evolve in species we don’t target. This is doubly problematic. The first problem is the simple loss of the biodiversity around us, on which wild ecosystems depend. A recent study found that over the last 30 years, the biomass of insects in Germany had declined in wild forests by 70 percent. The jury is still out on the cause, but many scientists believe a likely one is pesticides. The second problem is that among the species killed by pesticides are those that benefit us, including the natural enemies of the pests we are trying to control.

Along Came a Spider

Whether you like it or not, spiders are great at pest control. If you kill them in your home — and this is precisely what we do with many kinds of pesticide applications — you do so at your own expense.

As children, we learned about the old woman who swallowed a spider after swallowing a fly. That case didn’t turn out well. (Spoiler alert: She died.) Others have turned out better.

In the late 1950s, J.J. Steyn, a researcher in South Africa, was trying to figure out how to control houseflies (Musca domestica), longtime associates of humans. Houseflies have spread around the world to nearly every region we inhabit. They can be a real problem, especially when sanitation is poor. Houseflies carry more pathogens than cockroaches, including many that cause diarrhea and are associated with more than 500,000 deaths a year. Houseflies also evolve rapidly. By 1959, those in South Africa were resistant to at least 15 major pesticides.

Steyn gained a key insight from The Afrikaans Children’s Encyclopedia, perhaps while reading it to his own children. He learned that in parts of Africa, social spiders, those that live together in colonies, are intentionally brought into houses to control flies and other pests. The practice appears to have been used first by the Tsonga and the Zulu, who even set up sticks in their homes to make it easier for spiders to build nests. The colonies, often the size of a soccer ball, can easily be transported from house to house.

Steyn wondered if this technique could be used again.

In home kitchens and in hospitals, Steyn suspended spider webs by a string attached to a nail. They controlled flies effectively. Steyn repeated the experiment at the Plague Research Laboratory in South Africa. The fly population declined by 60 percent in three days in the lab’s animal house.

“In order to help protect humans against fly-borne diseases, it is suggested that colonies of the social spider be placed in public places like markets, restaurants, milk barns, public houses, hotel kitchens, as well as in abattoirs and dairies, and especially in kitchens and latrines on all possible premises,” Steyn wrote in a paper published in 1959 in the South African Medical Journal. “In cowsheds, they would also help to increase milk production.”

He imagined houses filled with giant balls of spiders, a world in which flies and the diseases they transmitted would become rare.

But don’t spiders bite humans? Each year, tens of thousands of “spider bites” are reported around the world, and the numbers seem to be increasing. The truth is that spiders rarely bite us, and nearly all of the reports are actually infections due to resistant Staphylococcus bacteria (MRSA), misdiagnosed by patients and doctors alike. If you think you have a spider bite, ask a doctor to test you for MRSA. Those odds are much higher.

One reason why bites are rare is that most spiders use their venom exclusively or nearly exclusively on prey rather than for defense. For spiders, it is nearly always easier to flee than to fight.

One study even attempted to find out how many pokes it takes to get 43 individual black widow spiders to bite artificial fingers made out of congealed Knox gelatin. After one poke, none of them bit. Nor did any bite after 60 repeated pokes. Sixty percent of the widows bit only after being pinched between artificial fingers three times in a row, and even then, they released venom only half the time. Those bites would not have been problematic to a human, just painful. Venom is costly to spiders, and they don’t want to waste it on you; they are saving it for mosquitoes and houseflies.

Wasps, Fungus to the Rescue

Spiders aren’t the only creatures in your home involved in pest control. Many types of solitary wasps prey on specific cockroach species.

Their technique is far different from that of spiders. By using their sense of smell, the tiny insects, some only a quarter-inch in size, locate cockroach eggs and commandeer them. The mother wasp taps the egg cases to make sure a roach is inside. Then, she pierces the case with her ovipositor, an organ used for egg laying, and lays her own eggs inside. The wasps hatch, devour the roach inside the egg case and escape by drilling a hole out to freedom.

Several researchers have attempted to release parasitoid wasps into homes to control roaches. All of those attempts have been, in one way or another, successful (though also typically poorly documented). Just know that if you find in your house an egg case with a hole in it, the case has likely birthed wasps rather than roaches. And those wasps may be in your house now, flying around and entirely beneficial.

Along with those critters, another natural pest control is Beauveria bassiana, a fungus found in soils. A research project has tested it on bed bugs.

If you spray the fungus on a surface in your home, the spores sit waiting. When a bed bug passes by, the spores attach to the external layer of fats on the bug’s exoskeleton, which the fungus can then penetrate. Now inside the body cavity, it kills the bed bug by simultaneously clogging and poisoning its organs and starving its body of key nutrients.

Throughout history, humankind has made choices to kill pests with ever more powerful weapons. What will happen if we continue this way?

The use of novel chemicals as weapons favors the evolution of ever more behaviorally and chemically defended pathogens and pests. They will be resistant, but the rest of life, the broader biodiversity, won’t be. We will unknowingly trade a richness of wild species — of butterflies, bees, ants, moths and the like — for a few resistant life-forms.

Household pests will continue to be nocturnal, active during the hours we are not, the hours in which we fail to pay attention (we kill pests when we notice them). To some extent, this has already happened.

During the time humans lived in caves, bed bugs evolved from bat bugs — diurnal critters that feast on bats when they are sleeping. Bed bugs, on the other hand, have become nocturnal; they feast on us when we’re sleeping. Many species of cockroaches and rats have also become nocturnal. Animals will also evolve to sneak through smaller cracks. The more we seal up our buildings, the smaller these organisms will become.

If things continue as they have, thousands of species of animals, each with an interesting story and most with no negative effect on us whatsoever, will be gone. In their place will be a diminutive group that hides from us. And as soon as we leave a room or turn off the lights, those little creatures will regroup and reclaim our living space. We will be surrounded by the consequences of our actions — thousands of tiny, resistant, evasive cockroaches, bed bugs, lice, houseflies and fleas.