Ostriches Are Endurance Runners, Thanks to the Spring in Their Steps 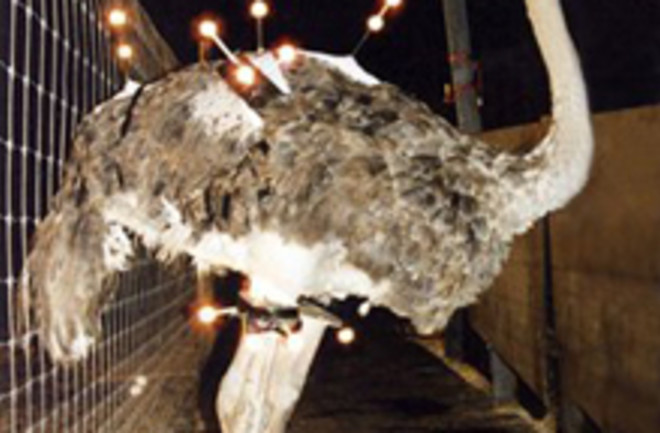 No, this ostrich is not decked out early for Halloween. The bird's glowing get-up is part of an experiment that settled just why these elongated creatures can run so much faster and farther than us: They have twice as much bounce in their step. Jonas Rubenson and colleagues adorned the tame ostriches with the reflectors at points that would show how their joints moved as they sprinted down a test track. The team watched the birds run and then sampled human volunteers the same way. Rubenson's study appears in the Journal of the Royal Society Interface.

"Cheetahs and lions are great sprinters, but they use a lot of energy when moving," he says. "However ostriches, horses and antelopes are adapted to running fast and economically over long distances." Rubenson says previous work had shown the ostrich uses 50% less energy running when compared with humans, yet can run at twice the speed. [Australian Broadcasting Corporation]

The question was how. Did the ostriches save energy by swinging their legs efficiently, or did the structure of their joints make it easier to run on for a long time? According to Rubenson's study, it is the latter: Ostriches and people do about the same amount of work to move our legs, but those lanky birds have springy tendons.

"Ostriches generate over twice as much power from recoil of elastic energy stored in tendons than humans, which means they need less muscle power to run at the same speed. Moving with elastic limbs is akin to bouncing on a 'pogo stick', where you don't have to work very hard to bounce along -- so it's all in the spring of their step." [BBC News]

Those pogo stick legs allow the ostrich to run in excess of 40 miles per hour. That's no cheetah speed, but it has inspired many a video of people chasing the flightless bird with their cars: We humans shouldn't feel too bad that ostriches are our bipedal betters. They've had a lot longer to practice.

Flightless birds are millions of years more accustomed to upright running than humans, through either having to escape predators or, in the case of the ancient terror birds, to hunt prey. [The Telegraph]

80beats: Running by the Books: Math for the Marathoner