It comes as no surprise to regular readers of mine that I have a special place in my heart for parasites. I have waxed poetic about their global dominion, but usually, I focus on the animal kingdom's most malicious moochers. Today, though, is all about plant parasites. Specifically, this lovely orchid:

Meet Gastrodia pubilabiata, a plant that survives in the most un-planty way. That lack of green isn't because it's dying—it doesn't photosynthesize. Instead, it's what's known as a mycoheterotroph

: it relies on fungi for food. But according to a new paper in

this particular species doesn't just suck the life from its mushroom hosts. Instead of offering nectar or other rewards for its pollinators, it uses the smell of the fungi rotting corpses to draw the flies that transport its reproductive dust. 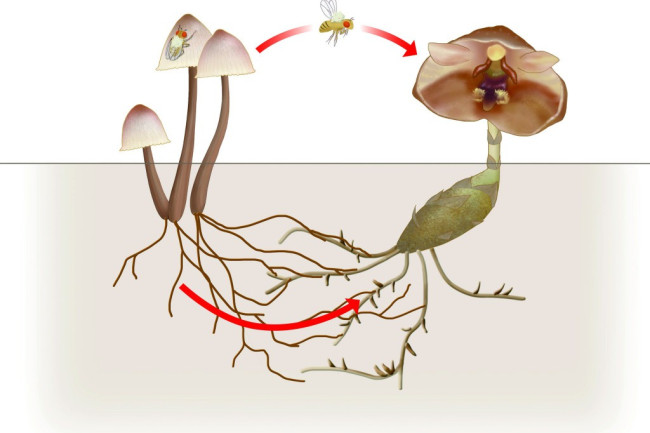 A figure depicting how the floral mooch relies upon its fungal hosts above and below ground. Figure 2 from Suetsugu 2018. Image Credit: Kobe University G. pubilabiata calls the islands of Japan and Taiwan home. It's a small, brown orchid easy to overlook in the dense, dark mess of decaying material where both it and the fungi it steals from live. The fungi are saprotropic, which means they themselves consume dead things. So, unsurprisingly, they attract insects that prefer to lay their eggs in rotting things, like fruit flies. Those fruit flies happen to be essential to the parasitic orchid's survival. Like most flowering plants, the orchid needs pollinators to land on it and accidentally cover themselves with its pollen grains, so that if the helpful insects lands on another orchid's flower, they can leave some of those grains behind, thus facilitating the exchange of reproductive material. Lots of flowers convince their pollinators to perform this helpful act by offering tasty treats like nectar. But G. pubilabiata gives the fruit flies that pollinate it nothing in return for their services. Instead, it simply tricks them into thinking it's a decaying corpse itself. Its brownish looks are part of that. But by manipulating the presence of decaying mushrooms nearby, Kenji Suetsugu from Kobe University

was able to show that the plants pollination success also depends on the very mushrooms it steals nutrients from, using them as a "magnet species" to attract the pollinating flies. When more dying mushrooms were around, the rate of pollen deposition rose by a little over 1/3. And the plants were also more likely to set fruit. 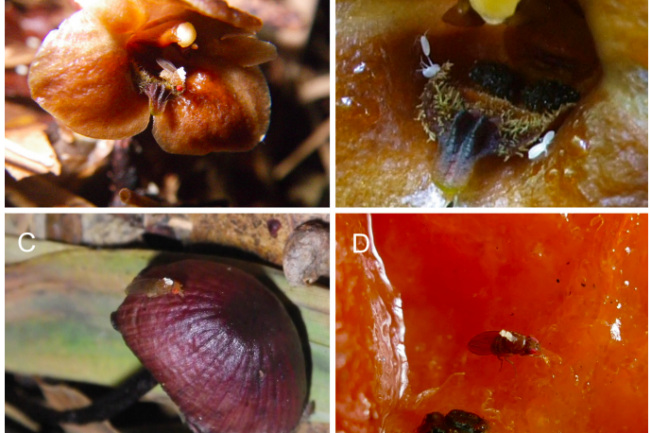 The orchid and the species it steals from and manipulates. You can see the fooled fly in (A), some poor, doomed fly eggs in (B), the mushroom fly magnet in (C), and a fly unwittingly carrying the orchid's pollen in (D). Figure 1 from Suetsugu 2018. Image Credit: Kobe University The orchid doesn't entirely rely on the mushrooms, though, to trick the flies. When they're removed, it's still able to reproduce because it emits a pungent odor reminiscent of rotting fruit to trick flies into thinking it's petals would be a lovely place to settle down and start a family, a trick called brood-site mimicry. That might not be so bad if the flower actually was a good place for the flies to lay their eggs. But it's not—the maggots that emerge need the fermenting fruits their parents usually leave them on, and are unable to survive on floral tissue. So the flies attracted by the fungi the orchid steals from and fooled by the scent of the flowers themselves not only do the dirty work of transporting the orchid's pollen, the offspring they're tricked into leaving are doomed. So the freeloading orchid steals its meals from mushrooms, and uses their scent to attract its pollinators, which it then tricks into essentially killing their offspring so it can have some of its own. And you thought animal parasites were cruel!

The 2019 Novel Coronavirus Outbreak: What It Is and How We're Dealing With It