Orchid lures in pollinating wasps with promise of fresh meat

A common wasp on a foraging mission catches an enticing scent on the breeze. It's a set of chemicals given off by plants that are besieged by hungry insects and it means that there is food nearby for the wasp's grubs - caterpillars. The wasp tracks the smell to its source - a flower - and while it finds nectar, there are no caterpillars and it leaves empty-mandibled. The smell was a trick, used to dupe the wasp into becoming a unwitting pollinator for the broad-leaved helleborine. 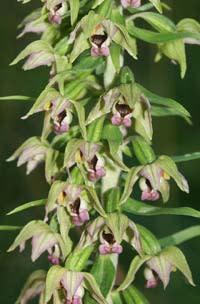 The broad-leaved helleborine (Epipactis helleborine)is an orchid that grows throughout Europe and Asia. It is but one deceiver in a family that is rife with them. About 10,000 species of orchids trick pollinators into visiting their flowers. Some attract males by mimicking the sight and smells of females. Others resemble orchid species that provide rich nectar rewards, while providing none themselves. But while thousands of species offer the potential for sex or food, only the broad-leaved helleborine advertises itself by promising fresh meat.

Darwin himself noted that even though the helleborine packs a substantial reservoir of nectar, it is pollinated by only two species of insects - the common wasp and the European wasp. Until now, no one knew how the orchid was attracting its pollinators. Jennifer Brodmann from the University of Ulm in Germany solved the mystery by testing how wasps responded to the smells and sights of orchids.

She found that the smell of the helleborine alone attracted just as many wasps as the whole flowers. In contrast, the sight of a flower in a glass box that didn't let any scents through was far less attractive. Luring wasps with odours makes sense for the helleborine, for it grows in shady parts of dark coniferous forests, where they are difficult to see. 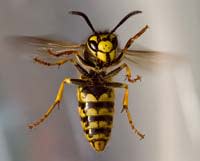 Brodmann used gas chromatography to analyse the chemicals released by the flower, and recorded the electrical responses of wasp antennae as the scents wafted over them. She detected several organic molecules such as hexanal and hexyl acetate that are collectively known as "green-leaf volatiles". They are produced by other plants when they are set upon by insects and those of the cabbage, for example, responds to caterpillar infestations by producing a very similar spectrum of chemicals to the helleborine.

In these other plants, green-leaf volatiles are a call for reinforcements. They summon predatory insects that feast on the caterpillars, or parasitoids that use them as living larders for their own eggs. Common wasps are no exception. By placing them in a Y-shaped tube with different scents at the prongs, Brodmann found that wasps were consistently drawn to the smell of helleborines over empty chambers. They even preferred chambers containing synthetic mixtures of the green-leaf volatiles released by the orchids.

Any wasp that is duped into visiting a helleborine flower still receives a drink of nectar for its troubles. In the future, it may associate the smell of green-leaf volatiles with a sugary reward, and be more likely to visit flowers of the same species. That suits the helleborine, which receives a specific pollination service.

By releasing the right chemicals, the broad-leaved helleborine has effectively hijacked the lines of communication that other plants use to recruit wasps. It's the first species known to do this, but unlikely to be the only one.

Brodmann also found that the closely related purple helleborine (Epipactis purpurata), which is also pollinated by wasps, produces similar levels of green-leaf volatiles. On the other hand, a third species from the same genus, the royal helleborine (Epipactis atrorubens), which are pollinated by bees, releases few if any of these chemicals.. The strategy seems to only work on wasps.