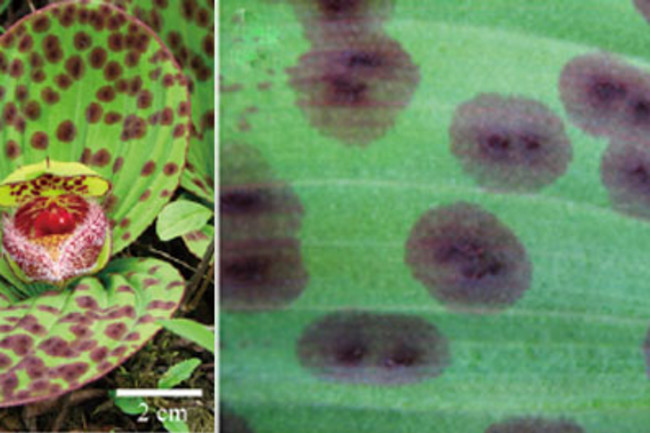 The lady’s slipper orchid (Cypripedium fargesii) does not look well. Its red and yellow flowers are nestled among two large leaves, both covered in unsightly black splotches. These look like the signs of a fungal infection, but they’re not. This orchid is deceptive, not diseased. It produces the black spots itself and in doing so, it lures in flat-footed flies that feed on fungus. The flies, duped by the orchid’s false spots, pick up pollen and spread it to another flower. By appearing infected, the orchid reproduces. There are many species of lady’s slipper orchids, but C.fargesii is an exceptionally rare variety. This critically endangered flower is found only in southwestern Chinese mountains. Zong-Xin Ren from the Chinese Academy of Sciences spent four consecutive summers on Yaoshan Mountain, almost 3,000 metres above sea level, studying a hundred or so of these rare flowers. It’s fairly easy to work out what pollinates a lady’s-slipper orchid. When insects land and enter the flower, they have to walk through a circular route before escaping through some fixed exits. Watch the exits, and you find the pollinators. This defined path takes the insects past the flower’s female organ – the stigma – and its male ones – the anthers. These deposit clumps of pollen onto the insects’ heads and bodies, which they carry to the stigma of the next flower they visit. The lady’s slippers are generally pollinated by bees but C.fargesii is different. Over many hours of observation, the only insects that Ren ever saw leaving the flowers were flat-footed flies. Ren captured four of them and when he peered at them under an electron microscope, he saw pollen grains from the orchid, and spores from a fungus called Cladosporium. This fungus infects leaves and fruits, and when it does so, it produces black mould spots. The purpose of the orchid’s black splotches was becoming clear. Ren also analysed the orchid’s scent, an unpleasant fragrance reminiscent of rotting leaves. He found that the flower produces over 50 aromatic molecules that are found in other flowers, but three unusual ones that are common to Cladosporium moulds. Ren thinks that these fungal odours lure the flies to the flower in the first place. Once there, the black spots add to the illusion. This ruse continues at a microscopic level. At the centre of each spot are hairs (‘trichomes’) that have evolved bulges and waists that mimic chains of fungal spores. The flower mimics the fungus in both appearance and smell. 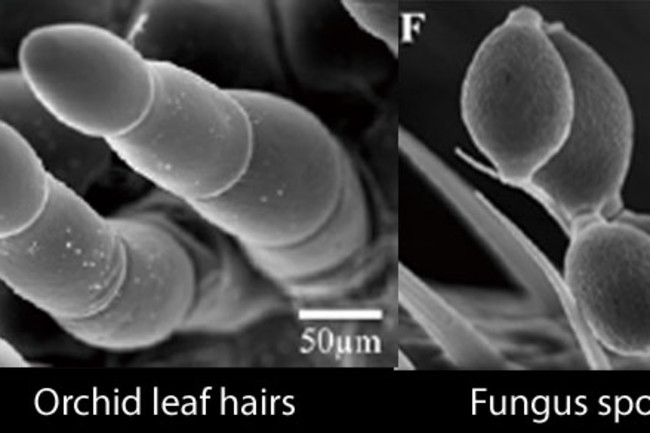 Darwin himself was fascinated by the evolution of orchids but he failed to realise the family’s massive capacity for deception. While many species reward their pollinators with edible pollen or sweet nectar, the majority – including the lady’s slippers – are liars that provide no such remuneration. Some species lure bees in with the promise of sex, or wasps with the smell of fresh meat. In fact, deception may explain why the orchids are among the most diverse of flowering plants, with anywhere between 22,000 and 26,000 species on record. They have evolved to con an ever greater variety of pollinators. But deception can go both ways. C.fargesii recruits fungus-eating insects to spread its pollen, by looking and smelling like a fungus, but offering no nectar. It has a mirror-image counterpart – a group of fungi called Monilinia that infect and kill plants. These fungi recruit flower-pollinating insects to spread their spores, by looking and smelling like flowers, and offering nectar. Reference: Ren, Li, Bernhardt & Wang. 2011. Flowers of Cypripedium fargesii (Orchidaceae) fool flat-footed flies (Platypezidae) by faking fungus-infected foliage. PNAS http://dx.doi.org/10.1073/pnas.1103384108NB: The title is pretty much a straight lift from the paper. I honestly couldn’t have improved upon it. Hats off to Ren and his fellow authors. More on flowers and pollinators: