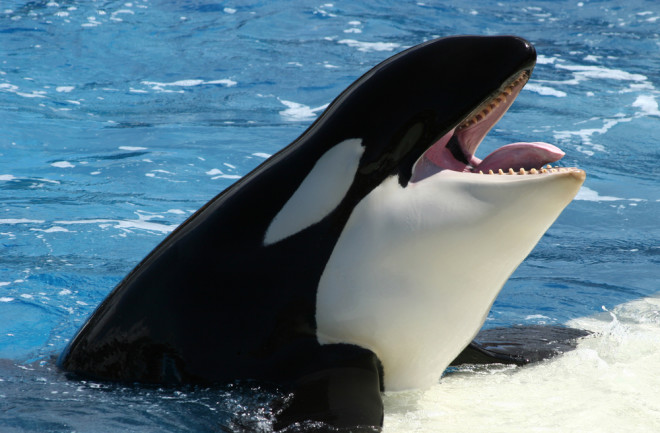 “Hello!” says the human. “Hello!” pipes the orca right back.

It’s not a children’s movie, but an actual orca emitting human(ish) words. An international team of researchers has taught Wikie, a 14-year-old killer whale in France, to mimic certain simple bits of speech, a discovery that gives them insight into wild orca dialects.

In all, Wikie learned six words, in addition to five orca sounds that she didn’t know before. The phrases included “hello,” “ah ha,” “one, two,” “Amy,” and “bye, bye.” She even nailed a few on her first try, though one took as many as 17 attempts to get right. The researchers taught her to “speak” by using a “copy” command that she had learned previously, though it had always been used to indicate that she should imitate physical actions, not sounds.

In a paper published Wednesday in Proceedings of the Royal Society B, the researchers detail how they first refreshed her memory on the “copy” command, and then had her repeat sounds made by her three year-old calf Moana, before progressing to unfamiliar killer whale noises. When Wikie demonstrated her imitation abilities with those sounds, the researchers moved on to human words.

When asked to say both “hello” and “one, two, three,” Wikie was able to say the phrases right back on the first try. The other words gave her a little more trouble, though she was able to repeat them with some practice. Still, Wikie was better at producing some sounds than others, though the researchers were nevertheless impressed by her ability to make human sounds given that orcas’ vocal systems look very different than ours. When asked to repeat the sounds, there was a fair amount of variability in her vocalizations, something the researchers say could be due to the simple difficulty of producing the sounds or even different levels of motivation between sessions.

After recording her speech, the researchers had six independent judges listen to Wikie’s vocalizations to confirm that she was imitating the human sounds well enough to be understood. While the sounds may be accurate, there’s no evidence that Wikie actually understands what any of it means. Instead, it’s simply a demonstration of orcas’ ability to learn and repeat new sounds, a skill that may be at the heart of some puzzling behavior observed in the wild.

Researchers have long tracked pods of killers whales by their dialects. Each pod produces unique calls, and this research reveals that these vocalizations are passed down through learning, rather than being a genetic trait. Researchers suspected this was the case, but hadn’t gathered enough evidence of orcas learning and mimicking sounds.

Some species, though not many, can learn to repeat human sounds. Belugas and bottlenose dolphins have been observed doing it, as well as elephants. How, and why they are able to do so varies, though the researchers do note that Wikie was producing the sounds in the open air, as opposed to under water as she normally would. This could add another layer of difficulty, though it also raises questions as to whether she would learn and repeat sounds differently underwater.