Orangutan Genome: The Orange Apes Evolved at Their Own Quirky Pace 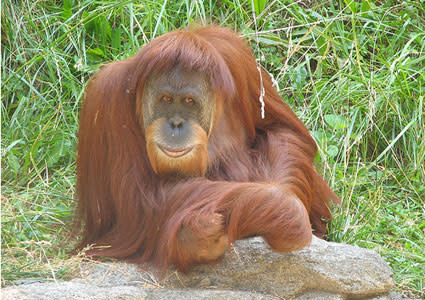 Welcome to the family of critters with sequenced genomes, orangutans. In Nature this week, scientists unveil the draft DNA sequencing of our great ape cousins—the only great apes that live exclusively in Asia.

What did scientists find in there? For one thing, orangutans share about 97 percent of the their genome with humans, compared to the 99 percent we famously share with chimpanzees. The two orangutan species—inhabiting the Indonesian islands of Borneo

—diverged about 400,000 years ago, lead author Devin Locke says. That's much more recently than scientists had thought. They also discovered that over the last 15 million years, orangutan DNA

changed at a different rate than either ours or chimps'. Orangutans have undergone fewer mutations of the DNA, have a lower gene turnover rate, and have fewer duplicated DNA segments.

"That doesn't mean the species itself has evolved more slowly, but that this particular mechanism of genome evolution has been proceeding at a lower rate," Locke said. "Humans and chimps, in sharp contrast, have experienced an acceleration in this form of evolution over the past 5 million years or so." [LiveScience]

That's not the only peculiarity they found:

As scientists use the new data to sort out the difference between the two remaining orangutan groups—and what their evolution says about all of us primates—they can simultaneously use it to figure out how best to protect them.

Knowing about their genetic diversity can help zoos and conservationists preserve and protect the species, Locke said. For instance, the Borneo and Sumatran species of orangutans should likely not be interbred, and genetically diverse populations are usually more likely to survive. In turn, the study has implications for human health. Inherited diseases are often linked to duplications in the DNA sequence that orangutans lack, Locke said. [Reuters]

80beats: 4 Messages a Pantomiming Orangutan Might Be Trying to Convey