Orange Is the New Maize 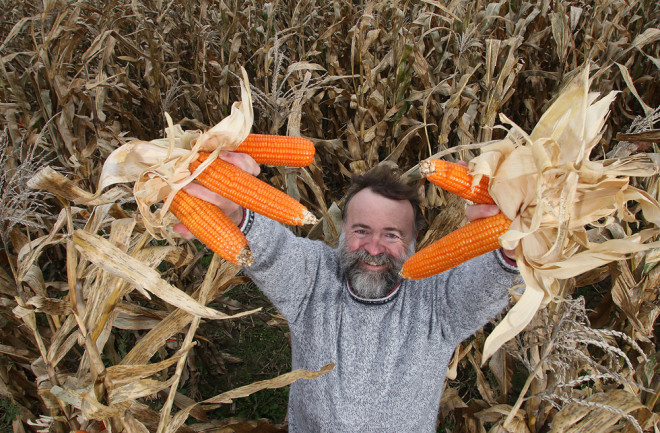 “I was the only one doing it,” researcher Torbert Rocheford explains demurely when asked about the expertise that had the government knocking on his door in 2001.

Rocheford, a plant geneticist at Purdue, drew the attention of the U.S. Agency for International Development (USAID) for his research on variations affecting provitamin A carotenoids — naturally occurring plant pigments that our bodies can convert to vitamin A — in maize. Working with USAID and later HarvestPlus and the National Science Foundation, Rocheford has used natural breeding techniques to pioneer high beta-carotenoid orange corn.

The bright-orange corn could help children in sub-Saharan Africa, where nutritionally inferior white corn is a dietary mainstay and thousands of vitamin A-deficient children go blind each year.

“Yellow corn is culturally unacceptable to some — it’s fed only to animals — so orange maize is fresh and untainted by that perception,” says Rocheford. “And it could provide twentyfold of vitamin A.”

Other high beta-carotene root vegetables, such as carrots and sweet potatoes, don’t grow easily in some African regions, so orange corn has the best chance of taking root and becoming a standard crop. Consuming the new maize also could prevent vision deterioration caused by macular degeneration in the elderly. One variety may be available in the United States by 2016.