One Giant Leap for Birdkind: A Magpie Looks in the Mirror and Recognizes Itself 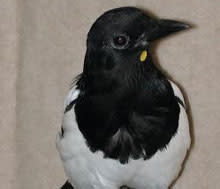 Some clever magpies can recognize themselves in a mirror, leading researchers to include them among the ranks of self-aware animals—an elite group that is generally thought to include only humans, great apes, bottlenose dolphins, and elephants. This new study suggests that a brain capable of surprisingly sophisticated intelligence developed in a few birds long after they split from the mammalian evolutionary tree, about 300 million years ago. Says lead researcher Helmut Prior:

"It shows that the line leading to humans is not as special as many thought.... After finding this kind of intelligence in apes, many people thought it had developed once in one evolutionary line with humans at the end. The bird studies show it has developed at least twice"[Reuters].

The researchers tested the magpies' abilities by placing a bright yellow or red mark on the feathers just below their beaks, so the dots could only be seen by looking in the mirror. Several of the birds reacted by standing in front of a mirror and trying to scratch the stickers off with their claws.

Black stickers placed on the birds' bodies did not elicit the same response. When no mirror was present, the magpies took no notice of the stickers [BBC News].

The findings, reported in the journal PLoS Biology, contradict the notion that only higher mammals with a neocortex brain area (the source of conscious thought and reasoning) could develop rudimentary self-awareness. The new study suggests that

magpies and other social birds that possess large brains with expanded cortical-like areas should display at least some level of self-recognition, remarks Irene Pepperberg of Brandeis University [Science News].

Pepperberg had remarkable results in studying thinking and communication with an African gray parrot named Alex, and other researchers have found surprising intelligence in crows. For more on birds' impressive abilities and senses, take a look at the DISCOVER article "Birds Navigate Using Magnetic Compass-Vision." Image: Helmut Prior, Goethe University