Perhaps the most common way that we tell different species apart is by looks. Different colors often mean deep-rooted differences, but in some species, color is a fluid concept. Take the chameleons: though it's a myth that they can match any color they see around them, they are able to modify the patterns on their bodies to blend in, and some are known for dizzying color changes that are used as social signals — a colorful way of communicating with the chameleons around them. The panther chameleon, Furcifer pardalis, is particularly well known for its vibrant beauty. These lizards are popular in the pet trade, where color 'morphs' or 'locales' are seen — the rarest highly coveted. These distinct looks are often named after Malagasy villages or islands where such colors are found. The Nosy Be morph is stunningly blue, like the chameleons found in that area, while the Sambava morphs are more mottled with green and yellow. On top of such stark geographic color differences, these little lizards also vary with season, age and mood (related: scientists make chameleon-mimicking material)

The highly variable colors of Furcifer pardalis. Photo credits; left: Emmanuel Broeks, middle: Marc Staub, right: Tambako the Jaguar. Despite the diversity of colors in these chameleons, they were classified as one species by French naturalist Georges Cuvier in 1829 — one of the 62 endemic species of chameleon on Madagascar. Observations have noted that the chameleons seem to separate into distinct groupings along their range. Swiss scientists were curious, though, whether the color patterns were really just skin deep. So, in a collaboration with local researchers, they collected blood from 324 different chameleons throughout their native range. They also took photos of the animals to compare differences in color to any differences they might find genetically. When the researchers examined mitochondrial and nuclear DNA sequences, they were surprised to find strong breaks along the chameleon's range. In fact, they found evidence that supported as many as 11 different species! 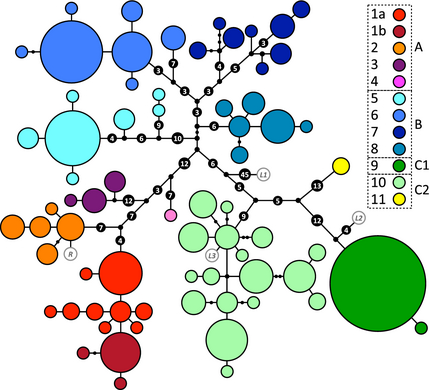 The haplotype network from Grbic et al. 2015 showing the genetic breaks along the chameleon's range. Each circle is a unique genetic code or 'haplotype', with the size of the circle corresponding to the number of individuals that share it. Black dots refer to the number of mutational steps in between haplotypes. The circle colors correspond to geographic units which are potentially 11 different species. The scientists then took the photos they had of each individual and compared coloration to genetics. When they mathematically analyzed each of the 324 color photographs, they found that each genetic lineage had a subtle color pattern that could be used to identify it. From these data, they were able to create a simple classification key that allows for most chameleons to be identified easily, so that anyone from pet owners to wildlife specialists in the area can ID which chameleon lineage they are looking at. 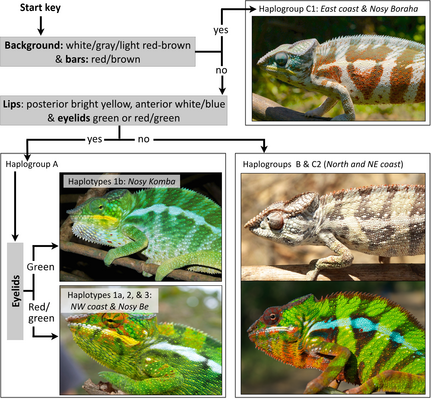 A portion of the handy color key created by Grbic et al. 2015 which allows for the separation of chameleons into major subgroups. It's perhaps not surprising that these chameleons are more diverse than we previously thought; Madagascar is known for its incredible biodiversity, with 80-90% of its species found nowhere else on Earth. But the findings mean that each species will need to be assessed independently by the IUCN and other management bodies — a daunting task in a region already struggling to protect its natural resources. Since man arrived there, dozens of species have already gone extinct, including 17 lemur species. What remains of Madagascar's incredible biodiversity is under severe threat from habitat destruction and harvesting for the pet trade, and these findings further enforce the need for better management practices. Citation: Grbic, D., Saenko, S. V., Randriamoria, T. M., Debry, A., Raselimanana, A. P. and Milinkovitch, M. C. (2015), Phylogeography and support vector machine classification of colour variation in panther chameleons. Molecular Ecology. doi: 10.1111/mec.13241