Elephant Birds, Biggest Ever, Were Creatures Of The Night 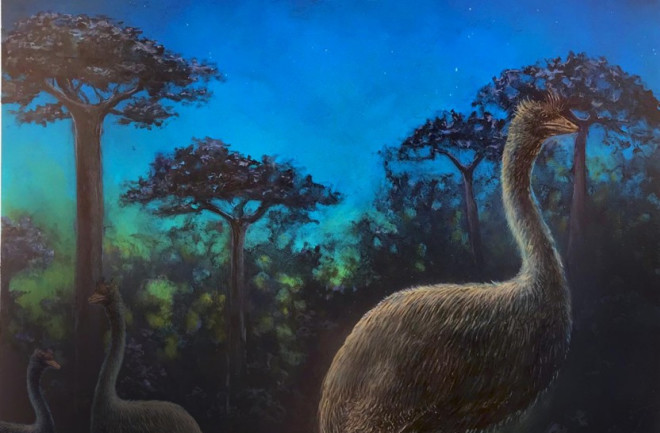 Madagascar's recently extinct elephant birds, once thought to be active during the day, were actually nocturnal, according to new research. (Credit: John Maisano for the University of Texas at Austin Jackson School of Geosciences)

They were enormous, the biggest of the big, and, say authors of a new study reconstructing bird brains, the elephant birds of Madagascar were also nocturnal. The new research reveals surprising details about the animals, their habitats and their closest evolutionary kin. Before they went extinct in the last millennium, Madagascar’s elephant birds were the biggest birds ever to walk the earth. Earlier this year, researchers determined that the largest of the flightless birds weighed 650kg (more than 1,400 pounds). Estimates for height are less exact due to limited information about their likely posture, but some scientists believe the birds may have stood 12 feet tall.

Based on the activity patterns of other large, flightless bird species still alive, such as emus and ostriches, elephant birds were long thought to be active during the day. That’s despite some early research into unusual features of their brains based on skull interior impressions called endocasts (no actual brain tissue of elephant birds has been recovered).

As early as 1942, and confirmed in 2008 with digital modeling, researchers noticed that elephant bird brains had relatively large olfactory bulbs, related to an animal’s sense of smell, and reduced optic lobs, associated with vision. But it took some more digging to piece together what that meant.

Today, researchers revealed new digital reconstructions of elephant bird brains, which they compared with the brains of other species.

Among the birds studied: New Zealand’s kiwi, which is the closest living relative to the extinct elephant birds, even though their homelands are more than 7,000 miles apart. (Scientists believe their distant ancestors were still capable of flight and dispersed across much of the Southern Hemisphere, even after the supercontinent Gondwana had splintered. Evolutionary modeling studies suggest the kiwi and elephant birds’ last common ancestor lived about 60 million years ago.)

The research provided further confirmation that the elephant birds had extremely reduced optic lobes, similar to but not quite as extreme as that of the kiwi. Kiwi have evolved hypersensitive hearing, smell and touch faculties, and rely so little on what vision they have (which is not much) that blind wild kiwis have been documented as functioning just fine.

The Madagascar birds also had enlarged olfactory bulbs, but here the two species analyzed differed: they were relatively larger in the bigger elephant bird, Aepyornis maximus, and not quite as large in the smaller species, A. hildebrandti. Again looking to modern living birds and their habitats, the researchers concluded that A. maximus must have lived in a forested environment, and A. hildebrandti in open grasslands.

Based on their sensory adaptations, the elephant birds were nocturnal, say the researchers.

Wait a minute, you might be saying, what about owls? Owls are the most famous example of nocturnal birds that adapted in the opposite direction, evolving extremely sharp low-light vision. That’s true, but owls and elephant birds have a few key differences: Owls fly and hunt, while elephant birds were flightless herbivores on an island that also happened to be devoid of natural predators (until humans arrived).

The study appears today in Proceedings of the Royal Society B: Biological Sciences. If you’re wondering why it doesn’t use the new genus and species classifications outlined in a September paper on elephant birds, note that the studies were in review at about the same time despite slightly different publication dates.