On the Shores of Lake Erie, Endangered Birds Catch a Lucky Break 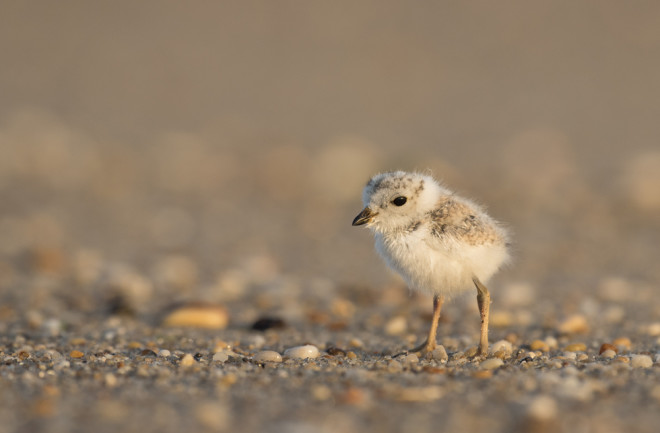 Endangered piping plovers are a precocial species, which means they mobile after emerging their egg. (Credit: Shutterstock) Protecting species in peril doesn't happen overnight. Rather, it's all about stringing together small wins that, in the long-term, make all the difference. A little luck can also go far. When waves surged on the Pennsylvania coast of Lake Erie early this summer, it could easily have been the end for a nest of piping plover eggs caught in the water’s path. Fortunately, a dynamic team of biologists, zookeepers and volunteers swooped into action, rescuing the eggs and rearing them at a quiet facility at the tip of the Michigan mitten. Recently, young birds from those very eggs were released, in the hopes that they will join the 75 nesting pairs of birds sustaining this endangered population.

A Piping Plover Nest in Distress

The day was sunny, but all was not well on the Pennsylvania coast of Lake Erie. As a pair of piping plover parents anxiously hopped about, waves swept over a shoreline nest and carried four eggs from their sandy home. Washed into shallow waters ten feet afield, the would-be shorebirds seemed to have met their demise. Unbeknownst to them, regional wildlife diversity biologist Tim Hoppe was at the same moment searching cabinets for Tupperware and cotton balls – the construction materials for an impromptu egg container. In fact, an entire team of adoptive plover parents was mobilizing in what Pennsylvania Game Commission wildlife biologist Cathy Haffner describes as “basically a flurry of texting!” Earlier the same morning, shared electronic communications had been celebratory: the first piping plovers to nest on Erie’s Pennsylvania shores in 60 years had just successfully hatched their chicks. Come afternoon, however, things turned more somber. A bird monitor noticed water and wind threatening the state’s second, un-hatched nest. It was Sunday, and business offices were closed, but the monitor got in touch with Catherine, who contacted Tim. He arrived at the beach just in time to pluck the washed-out eggs from the water. A trip to a local tractor supply, 10 minutes before closing, yielded an incubator that would keep the eggs warm for the night.

The rescue was novel in Pennsylvania, but similar scenarios have played out for years in the Midwest. In fact, Catherine did her graduate research with University of Minnesota ornithologist Francesca Cuthbert, who first incorporated captive rearing programs into the Great Lakes Piping Plover Conservation efforts. When they first began rescuing abandoned and washed-out eggs, Dr. Cuthbert and her team borrowed time in a 20-by-20-foot room. The efforts have expanded, and today the Detroit Zoological Society’s Associate Curator of Birds, Bonnie Van Dam, oversees the captive-rearing arm of the conservation efforts. Her team of zookeepers is based at the University of Michigan Biological station each summer. They knew just what to do when this summer’s Pennsylvania eggs arrived in Michigan after a long road trip. They watched, turned, and weighed the eggs daily. They supervised hatching, which takes up to four days for a given egg. Then they monitored the new chicks, taking weights and delivering worms and observing behaviors. “We (zookeepers) are basically professional animal stalkers!” laughs Bonnie. Actually, she notes, piping plover chicks are generally quite independent. Altricial birds, such as robins and condors, are born naked and helpless. Piping plovers, in contrast, are a precocial species, meaning they are relatively mature and mobile after emerging their egg. Just 4 to 6 hours after hatching, each bird resembled a feathered cotton ball on unsteady toothpick legs, scooting toward worms and crickets. With siblings and mirrors for company, and feather dusters for warmth, the chicks were safe.

Fast forward 20 days, and the plovers had progressed from sand-filled bathtubs, via a kiddie pool, to a lakeside enclosure. They were nearing graduation. Zookeeper Matt Porter predicted the birds were on schedule to be released in just a few days provided there weren’t any setbacks.

Members of the Great Lakes Piping Plover Conservation Team trek down sand dunes to a lakeside release site. (Credit: Hannah Gavin) They certainly looked ready to go as they ran from waves, squatted among plants, and flew in the longest stretches a 5-meter enclosure would allow. Still, how would they fare, far from their protectively netted home? Research shows that captive-reared plovers are responsive to potential predators, so the same inborn knowledge that leads them to eat and fly will help defend them upon release. Unfortunately, captive reared plovers produce fewer successful offspring than their wild-reared counterparts. Still, a 2008 study reported that the captive-reared Great Lakes plovers constituted up to 3 percent of the birds in the total population. Plus, more chicks have been successfully reared each summer of the ensuing decade.

Come release day, all chicks get a final weigh-in. Then they are loaded into a plastic pet crate, and zookeepers part with the birds they’ve come to know and love. Plover banding duo Stephanie Schubel and Sarah Saunders secure the crate in the rear seat of a car, and head for the big lakes. Plover peeps sound out in waves, as if the birds keep re-remembering their excitement about impending freedom.

Freedom! A newly released piping plover explores the beach. (Credit: Hannah Gavin) On the beach, the crate is opened and the plovers depart with little sentiment. Watching them soar, it’s hard to remember the peril they endured early on. Without help, the Pennsylvania eggs would never have hatched. Even with help, their road wasn’t smooth. Of the nest’s four eggs, one was cracked during the washout. Another was whole, but never hatched; the tumble rendered the embryo unviable. Circumstances certainly weren’t ideal even for the two remaining eggs. But, Bonnie points out, dealing under non-ideal circumstances is central to the Great Lakes Piping Plover Recovery efforts. As the newly released plover chicks swoop along the beach to independence, they are a living testament to the team’s success in doing just that.