On the Path Towards Leviathan 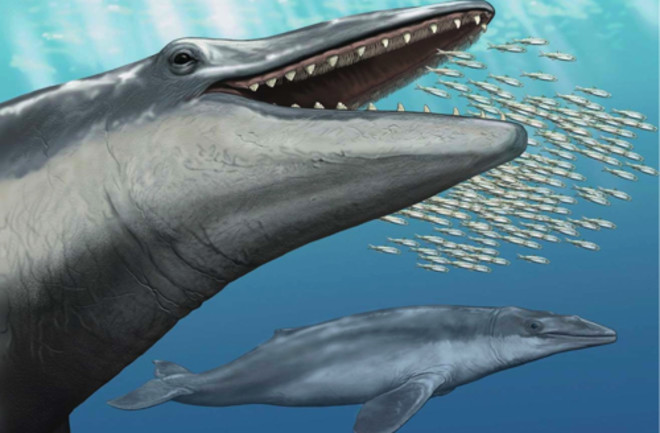 It's time to add a new chapter to the Whale Chronicles.... ...more below the fold... Evidence from both DNA and fossils agree that whales evolved from hoofed mammals on land. At first they may have been occasional swimmers, only later evolving into meat-eaters hunting for prey in the water. Between about 50 and 40 million years ago, they became increasingly adapted to the sea. Paleontologists have found fossils of dozens of species of early whales documenting this transition. Most of those lineages of early whales became extinct. Living whales belong to only two lineages that emerged about 35 million years ago. One branch, the toothed whales, include sperm whales and dolphins. They continued to hunt for big prey, using sophisticated sonar to help them find fish and squid. But the other lineage took a very different path. They evolved into giant grazers known as baleen whales. They gulp vast quantities of water and then filter out the tiny fish or invertebrates with the help of baleen--giant fronds of keratin. As I've written here, baleen is all-or-nothing among living whales. They either have it, or they don't. Just as we want to know how whales left land, the question naturally arises, how did baleen evolve? Last year an important piece of that puzzle fell into place with the description of a fossil whale--a baleen whale without baleen. The 25-million-year-old Janjucetus still had the ancestral teeth, but it had acquired some traits only found in baleen whales today, such as lower jaw bones that were no longer fused at the front. Now scientists have found more pieces of the puzzle. In a paper posted today on the journal Systematic Biology, researchers look at how those primitive baleen whales evolved the body plan we see today. First they analyzed fossils and DNA from living baleen whales to produce a detailed tree of the entire group. They then noted where along the tree different parts of the baleen whale anatomy first emerged. Some of those traits have long been known; others the scientists are reporting for the first time. After the ancestors of Janjucetus branched off, for example, the lower jaws of baleen whales became thin and bowed. They still had teeth, but they began to grow baleen. The evidence the scientists offer for early baleen comes from fossils of a whale called Aetiocetus. Baleen doesn't fossilize easily, but it leaves evidence of its existence on whale skulls, which do. In all living whales, baleen tissue is supplied with blood by vessels that fit snugly into troughs cut into the palate. Toothed whales don't have these troughs (known as nutrient foramina), nor do fossils of primitive whales. Janjucetus, an early baleen whale, doesn't have the troughs either. Yet Aetiocetus--a baleen whale that still had teeth--had the troughs. So it seems that they had both teeth and baleen: a classic transitional form. The painting above, by the irreplaceable Carl Buell, is a reconstruction of Aetiocetus as the scientists envision it. Earlier baleen whales may have begun filtering prey with their teeth, the way crabeater seals do today. Baleen may have evolved in whales such as Aetiocetus as a way to make tooth-filtering more efficient. After Aetiocetus branched off, however, baleen began to take over while teeth began to fade. Today baleen whales develop tooth buds as embryos, but they disappear as the whales mature. The authors of the new paper took a look at what happened to three genes that build tooth enamel in mammals. In other mammals--including us--the genes have evolved, as natural selection sculpted teeth for different ways of life. They still work. They still work in toothed whales, too. But in baleen whales, something else happened. The enamel genes broke down. They mutated in devastating ways, preventing the genes from making working proteins. These broken genes are another imprint of evolution, fossils made not of rock, but of living DNA. [Image courtesy Carl Buell]