Donna Kalil is head python elimination specialist in the Everglades. After capturing and euthanizing more than 650 of the invasive snakes, many more remain a threat to the ecosystem. 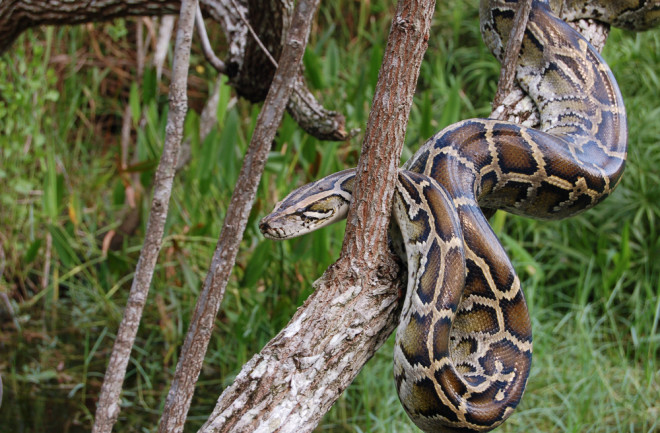 Darkness has descended over Everglades National Park. Donna Kalil and her team are driving back and forth across levies and access roads in her Ford Expedition, shining spotlights towards the roads in the hopes of spotting a python that’s left cover.

Sometimes they’ll drive hours, or even days, before seeing a snake shoot across the road, camouflaged in its natural brown and pea-green patterns. When the team finds their target, they’ll sneak up and grab it close enough to the back of the head to avoid being bitten. At night the pythons are hunting so they’re less likely to realize what’s going on. Invested in their own search for prey, they don’t even realize they are the invasive prey.

“I’ve been bitten so many times,” says Kalil. “It doesn’t feel good, but the biggest threat is when they constrict around your neck or, in the case of the big ones, your whole body.”

However, she says, they let go when you do. If you’re not attacking, they won’t either. Kalil is head python elimination specialist for the “Everglades Avenger Team.” She hunts pythons year-round; but right now she’s in the middle of The Florida Python Challenge. The lucky winner for the largest python will receive $10,000. “Lately we’ve been staying out until 5 a.m. looking for them,” she says.

Taking Over the Landscape

Hunters like Kalil are desperately trying to remove the invasive snake before it eats all of the other wildlife in the Everglades, Big Cypress Wildlife Management Area and other Florida wildlife preserves.

The first Burmese python was spotted in 1979, likely the result of a pet released into the wild. Since then, they’ve taken over the landscape across southern Florida. The snakes can grow huge, the largest one found weighed 215 pounds. Kalil estimates that every snake she catches and euthanizes saves around 100 native species from being hunted.

The snakes aren’t usually dangerous to humans if handled correctly because they’re non-venomous. But, according to the U.S. Geological Survey, mistakes can happen. "We cannot categorically rule out the possibility of a fatal attack,” the USGS warns in online information. The agency compares the situation to the risk of alligators, with the snakes inhabiting ponds, canals or other bodies of water in Florida parks and suburban areas. “Attacks are improbable but possible.”

Burmese pythons, which are native to Southeast Asia, fit in well in Florida because it’s a  subtropical climate. The snakes are generalists, meaning they eat just about anything from mice to white tail deer as they get bigger. The snakes have cleared the swamps of much of the state’s stunning wading bird population. The claws of bobcats have even been found in their massive stomachs.

The snakes diet consists of at least 47 species of birds, 24 species of mammals and two species of reptiles. “These guys were initially bred in captivity for profit and that’s why they’re so successful. They’re really good at eating and at making more snakes,” says Ian Easterling, a biologist at Conservancy of Southwest Florida.

Easterling is concerned that the invasive predators could create a “Silent Spring” scenario, where suddenly the damage to the ecosystem is done and we’re too late. “If we don’t stop them, one day they’ll be nothing left,” he says.

His team is placing tracking devices on snakes in Big Cypress Wildlife Management Area and using them to find and euthanize the adult females who carry the eggs that will produce the next generation. “We’re looking for the high-value targets,” he says.

These targets are difficult to find because the snakes survive by hiding from predators and prey alike, both to get away from dangerous situations and to successfully pounce. But their only current predator here is humans. “We don’t even know how many are in the wild,” Easterling says.

Kalil hopes she’s making an impact. To date her team has spotted and euthanized 680 snakes. But she doesn’t take any pleasure in killing them. “These animals don’t belong here, but it’s no fault of their own. I hate to have to do it but it’s either them or the native species,” she says.