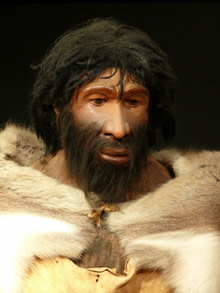 Did Neanderthals enjoy some diversity in their diet? A study out in this week's Proceedings of the National Academy of Sciences claims to offer more evidence that these hominids ate a wide-ranging diet including cooked grains and grasses rather than the cartoon caveman's diet of meat, meat, and more meat. Amanda Henry has made the case before; in April 2008 she said that micro-fossils of plant material could be found in the plaque of recovered Neanderthal teeth. Now, she says, her team has found more traces of grains and plants stuck in the teeth of Neanderthal fossils unearthed in Belgium and Iraq.

After analyzing a selection of these particles from European and Middle Eastern Neandertal dental remains, the team found "direct evidence for Neanderthal consumption of a variety of plant foods." ... Some of the Paleolithic snacks seem to have included legumes, date palms and grass seeds. The grasses were from the Triticeae group, which includes wild varieties of barley, rye and wheat relatives. [Scientific American]

Furthermore, the grains and starches present show the signature of having been cooked—probably by boiling in water—according to study author Dolores Piperno. To test this out the researchers themselves cooked similar grains, and the effects matched what they saw in the Neanderthal samples.

"The evidence for cooking is strong. The starch grains are gelatinised, and that can only come from heat associated with cooking," Piperno said. Similar tests on the Belgian Neanderthals' teeth revealed traces of cooked starch that probably came from parts of water lilies that store carbohydrates. [The Guardian]

Previously, some chemical analyses of Neanderthal

bones had backed up the idea that they were almost totally carnivorous, if not completely so. But, Alison Brooks (who was not involved in the study) tells the BBC

, those studies had simply checked the protein levels.

"We've tended to assume that if you have a very high value for protein in the diet that must come from meat. But... it's possible that some of the protein in their diet was coming from plants," she said. [BBC News]

This new study would support the growing notion that Neanderthals were more sophisticated than we humans have long believed. But if Neanderthals truly were accomplished cooks and occasional plant eaters, that only heightens the mystery of why they disappeared while our ancestors survived. Related Content: 80beats: Did Neanderthals’ Hasty Growth Hamper Their Mental Development?