Oldest Human Fossils Outside Africa Push Back Our Timeline...Again 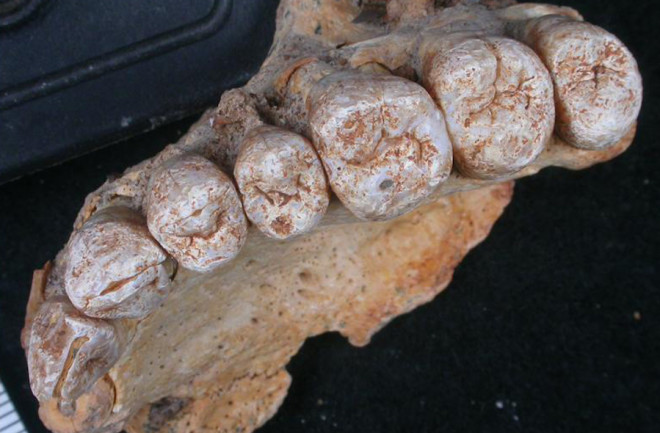 The oldest human fossils outside Africa, a partial upper jaw bone and several teeth, were found in Misliya Cave in Israel and may be almost 200,000 years old. (Credit: Israel Hershkovitz, Tel Aviv University)

Time keeps marching on…backwards, at least when it comes to telling the story of human evolution and migration. The oldest human fossils found outside of Africa suggest our species may have left that continent 200,000 years ago.

You may recall that 2017 was the year that the conventional timeline for human evolution and migration finally toppled thanks to overwhelming archaeological and paleogenetic evidence. Our species is much older, and left its ancestral continent of Africa much earlier, than we previously thought. But a month after leading paleoanthropologists formally called for a rewrite of the timeline for humans leaving Africa, a stunning find in Israel pushes the revised date back even further.

Last year, 300,000-year-old fossils from Jebel Irhoud, Morocco, proved that Homo sapiens evolved at least 100,000 years earlier than conventionally thought. The Moroccan fossils, along with somewhat younger finds at the Ethiopian sites Herto and Omo Kibish, crushed the old school notion that our species emerged only in the last 200,000 years.

Most paleoanthropologists now agree on this new start date for our species in Africa (though a small number of researchers argue that humans evolved outside of Africa). But there is still a considerable amount of disagreement in the field about when anatomically modern humans left the continent and spread across Eurasia. For decades, conventional thinking set the date of our first exodus between 40,000 and 60,000 years ago.

Support for that conventional date eroded over time, however: A few 20th century fossil and artifact finds in Israel showed that anatomically modern humans were in the region up to 115,000 years ago. In China, a number of sites hint that modern humans may have reached East Asia 80,000 to 120,000 years ago and, in Australia, thousands of artifacts believed to belong to modern humans suggest an arrival date of 65,000 years ago.

Today, a partial jawbone from Misliya Cave in Israel joins those other early fossils outside Africa — and this new find is a lot older.

The partial jawbone and teeth from Misliya Cave in Israel are about as old as human fossils from Herto and Omo Kibish, both in Ethiopia, but considerably younger than the fossils described in 2017 from Jebel Irhoud, Morocco. (Credit: Rolf Quam, Binghamton University)

Sink Your Teeth Into This One

Known as Misliya-1, the partial maxilla, with several teeth preserved in situ, is 177,000 to 194,000 years old. That date range was determined by three different dating methods: uranium-thorium, combined uranium series and electron spin resonance. Tools found nearby (more on them below) were found to be approxiately the same age using thermoluminescence.

That date range makes Misliya-1 the oldest human fossils outside Africa as well as a contemporary of the humans found at Herto and Omo Kibish in Ethiopia. The Ethiopian fossils, however, like the even older Jebel Irhoud individuals from Morocco, exhibited some primitive traits. Crucially, all of Misliya-1’s features fall within the range of anatomically modern humans, and none of the traits resemble those of Neanderthals or other archaic humans.

Found with Misliya-1 were stone tools that belong to the Levallois technology, one of the most sophisticated styles of toolmaking in the prehistoric record. Levallois technique requires the toolmaker to prepare a stone, called a core, by pre-shaping it. The actual tool is then struck from the core. This method allows for more precise shaping and was used to make a range of items, from scrapers to projectile points.

An intriguing sidenote about the Levallois method is that the artifacts it produced, found in Europe as well as Asia and Africa, tend to be more uniform from one to the next than those of earlier technologies. Some researchers believe this suggests that toolmakers taught each other the technique using both demonstration and spoken language.

The entrance to Misliya Cave, one of several caves located on the west side of Mt. Carmel that hold evidence of prehistoric human activity. Misliya had collapsed sometime after the Early Middle Stone Age and occupation by the individual now known to science as Misliya-1, the oldest human remains outside Africa. (Credit: Mina Weinstein-Evron, Haifa University)

Longtime readers of Dead Things who know how obsessed I am with the fossilsfound at Dmanisi in the Republic of Georgia may be wondering why the Misliya jawbone, at less than 200,000 years, is considered the oldest human fossil outside Africa. Yes, the Dmanisi hominins belong to the genus Homo and heck yeah, they are older, a lot older (at 1.89 million years, about 10 times as old).

There is disagreement about which Homo species count as human (just as some paleoanthro types disagree whether certain individual hominins in the fossil record represent discrete species or are merely different populations of a single species). In common usage, unless otherwise specified, the term “human” on its own refers to anatomically modern humans. You know, us.

The new Misliya-1 research, as well as a commentary on the study, appears today in Science.