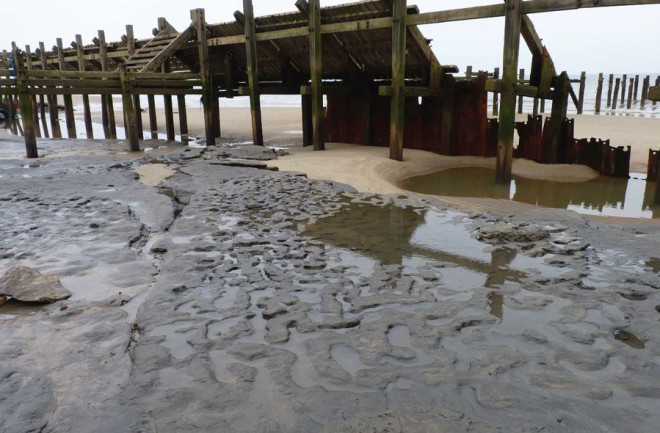 View of footprint surface looking north. Credit: Simon Parfitt Citizens of Britain can now trace their origins several large steps backward in time. Archaeologists recently discovered the oldest set of human footprints outside of Africa along the eastern coast of Britain. Rough seas last summer in the village of Happisburgh, Norfolk, washed away portions of the shore revealing a set of about 50 footprints. Researchers estimate the prints are between 800,000 and 1 million years old, which is now the oldest evidence of early humans ever found in northern Europe.

Due to the various sizes of footprints, researchers believe a mixed group of at least five adults and juveniles were walking along mudflats of what was then the Thames River estuary. Based on the size of the prints, researchers believe the group was related to Homo antecessor, or “Pioneer Man,” which died off some 800,000 years ago. The group was likely scouting the area for food, and could have been related.

Researchers found 50 footprints from a group of five adults and juveniles. Prior to the Norfolk find, the oldest human remains found in Britain were a set of tools dating back 700,000 years. Older human evidence tends to be found in southern Europe where researchers, for example, have unearthed 780,000-year-old skull fragments in southern Spain. The Norfolk find sheds new light on the tenacity and adaptability of northern Europe's earliest human ancestors, Chris Stringer, an archaeologist with the project, told the Associated Press:

"This makes us rethink our feelings about the capacity of these early people, that they were coping with conditions somewhat colder than the present day,” he said. "Maybe they had cultural adaptations to the cold we hadn't even thought were possible 900,000 years ago. Did they wear clothing? Did they make shelters, windbreaks and so on? Could they have the use of fire that far back?"

The discovery is significant to our understanding of human origins, but it’s also incredibly lucky. Finding preserved footsteps is difficult, given the punishing forces of erosion along seacoasts. Previously, the record for the oldest set of footprints in Britain was 7,500 years old, which pales in comparison to the Norfolk find. The Norfolk team called the Happisburgh prints a “one in a million” find. Fortunately, archaeologists captured plenty of photographic evidence to study Britain’s oldest footprints in May 2013, because what the sea gives it also takes away. Most of the ancient footprints have already disappeared due to erosion. However, researchers are optimistic that the same forces could someday unveil new evidence, as well.