Offices Are Rife With Skin and Nose Bacteria 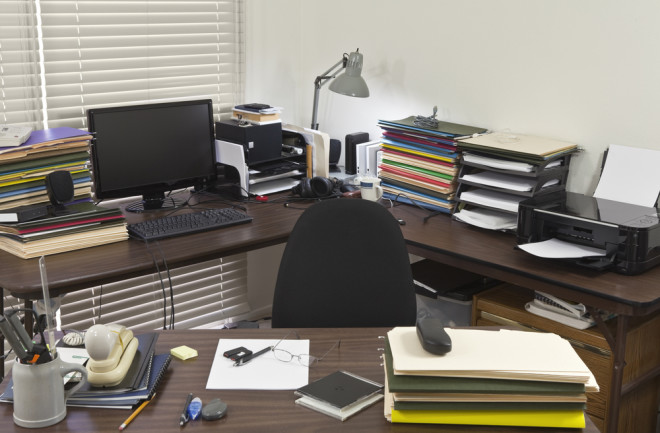 (Credit: trekandshoot/Shutterstock) Most of us spend a whopping 90 percent of our time indoors, which is the sort of statistic makes you want to spend your lunch break outside — especially when you consider the microbes that share your workspace. Scientists are increasingly interested in the ecosystems of bacteria, fungi, and other micro-organisms that share those artificial environments with us. That’s why John Chase of Biota Technology and his colleagues sampled the microbial communities in offices in Flagstaff, San Diego, and Toronto. In all of the samples, human skin bacteria made up 25 to 30 percent of the genetic material they captured, followed by a “small but consistent” contribution from the bacteria that live in our noses, which is something fun to think about next time you touch anything in your office.

The researchers were interested in how different features of the indoor environment – like building materials, ventilation systems, climate control, and human traffic – affect which kinds of microbes take up residence. They mounted sampling plates on the floor, ceiling, and one wall of three offices in each city. Each sampling plate contained swatches of common office building materials: painted drywall, ceiling tile, and carpet. Sensors nearby recorded humidity, temperature, and light levels. Chase and his team took samples four times during the year-long study, once in each season. They ran each sample through genetic sequencing to produce a metagenome: a combined genome of all the organisms in a sample. Some phyla of bacteria, like Proteobacteria, Firmicules and Actinbacteria, were common in all three cities, but they showed up in different proportions. Flagstaff’s microbial population was far more diverse than the other two cities tested.

The human microbiome was only the second largest contributor to the samples. The majority of the genetic material came from sources that the researchers couldn’t identify – but it definitely didn’t come from things that grow on people. Chase and his colleagues say most of those microbes probably came from the environment outside the office. In the samples, the differences between cities were marked enough that a machine-learning algorithm could correctly link a sample to a city 85 percent of the time – a success rate 2.67 times better than random guessing could achieve. Of course, doesn’t necessarily mean that every city has a noticeably different population of microbes than its closest neighbors. “I believe that the differences we see are regional differences,” says Chase. The three cities in the study are each situated in a region with markedly different climates and ecosystems than the others. Since microbes from outdoors are also the largest segment of the indoor microbial community, it makes sense that office microbiomes take on a regional flavor. Cities closer together might not look so different. The team published its results this week in the journal mSystems. “We looked at distinct environments so it is difficult to say how different a climate would need to be before we saw indoor microbial community differences,” says Chase.

The study provides a first look at how geography shapes the microbes we live with, even indoors, but observers in the field caution against drawing hard and fast conclusions at this stage. Nine offices provide a large enough sample to raise some interesting questions, but microbiome researcher Curtis Huttenhower, who commented on the study, looks forward to seeing follow-up studies with larger sample sets. “We were recently looking at the uniqueness of the human microbiome, and even working in a population of a few hundred, it was difficult to tell how broadly the uniqueness of individual subjects in that population would generalize to larger populations,” he said, “So with a very, very small sample size of a few offices in a few locations, it's the early days.”