Ochre Engraving On Bones From China Oldest Symbolic Use 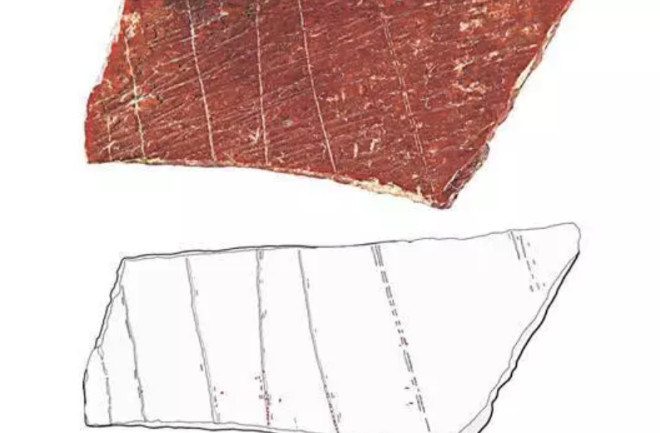 Ochre engraving on a rib fragment from China is the oldest evidence for the material’s symbolic usage, say researchers behind the find (top: photograph; bottom: illustration). (Credit: Francesco d’Errico and Luc Doyon)

Two pieces of animal bones with ochre engraving, found in central China, are the latest evidence that members of the human family used the material to express abstract ideas much earlier than once believed — and much further from Africa.

Researchers studying the find call it the oldest such example of the symbolic use of ochre. At more than 100,000 years old, the discovery raises another challenge to the conventional model of human evolution.

Aside from fossils, ochre is perhaps the most important material for revealing the story of human evolution, including how and when our cognitive abilities emerged.

The iron-rich rocks known as ochre turn up around the world and frequently at archaeological sites, including in prehistoric paint kits and ritual burials. Today, ochre remains an important pigment for ritual use — and for more practical applications, such as sunscreen — in much of the world.

Because of its widespread use throughout the story of human evolution, ochre serves as a proxy for the cognitive abilities of our ancestors and other hominins, or members of our family tree.

For example, chemical signatures preserved either in the ochre or in stone artifacts found with it can tell researchers where the material was collected. If its origin was hundreds of miles away, the distance suggests the individuals using the ochre either traveled into the territory of other humans or traded with those groups. Both activities imply complex social skills.

Researchers can also learn a great deal by how the ochre was processed for use, including whether it was heated and mixed with other ingredients, which suggests complex, multi-step planning.

According to the team behind the latest discovery, two fragments of animal rib from the central Chinese site of Lingjing, in Xuchang, have clearly intentional incisions. The researchers isolated ochre residue in one of the pieces.

Interestingly, the bones were already weathered, and not fresh, when the incisions were made, apparently by multiple sharp tools. The meaning of the marks is unknown.

The bones, about 110,000 years old, turned up at the same site as a pair of partial human skulls known as the Xuchang crania.

Formally described in 2017 and dated to be more than 100,000 years old, the skulls have a unique blend of ancient and modern traits. Their species is unclear.

For example, the braincase is large, suggesting a big brain similar in size to our own. The shape of that braincase, however, is low and broad, like those of archaic members of the genus Homo.

Some of the more breathless press coverage of the Xuchang ochre engraving has touted the find as the oldest evidence of symbolic use of ochre by humans. That may be overstating things a bit, and also misrepresenting its greatest significance.

The Neanderthals, for example, collected and used ochre about 250,000 years ago in Europe, although it’s unclear if the material had symbolic or purely practical value to them.

(And yes, Neanderthals are humans, because they’re fellow members of the genus Homo. A growing number of researchers, in fact, view H. sapiens and Neanderthals as different populations of humans rather than separate species.)

Even older ochre artifacts have been unearthed in Africa.

In 2018, for example, a trio of papers on Kenya’s Olorgesailie site described pieces of ochre intentionally shaped by unknown hominins, possibly early H. sapiens. The material is more than 300,000 years old.

Ochre found at an archaeological site in South Africa’s Northern Cape region, is up to half a million years old, though some researchers dispute the dates and the material’s use is unclear.

That’s not to suggest that the Xuchang ochre engraving is no big deal.

It is older than an ochre cross-hatch pattern on a flake of rock from South Africa’s Blombos Cave. Dated to be about 73,000 years old, the artifact is generally considered to be the oldest unequivocal symbolic use of the material.

(Blombos Cave is also home to a 100,000 year-old paint kit that includes ochre, and some researchers believe the pigment must have had symbolic use at that time.)

What’s arguably more significant about the Xuchang ochre engraving is its location. For decades, paleoanthropologists have divided themselves into two camps, often along geographic lines, arguing for two different models of human evolution.

The more dominant camp among Western researchers has long held that our species evolved exclusively in Africa, and then dispersed to Eurasia 60,000-80,000 years ago. (Though the dispersal date keeps moving back, thanks to significantly older finds such as Misliya-1 and Apidima 1, fossils from Israel and Greece, respectively.)

The second camp within paleoanthropology, led by East Asian researchers but gaining traction, holds that multiple, regional populations of H. sapiens evolved separately from earlier archaic hominins spread across both Africa and Eurasia.

Unearthing a 110,000 year-old animal bone fragment with apparent symbolic use of ochre in central China tells us that there were members of the genus Homo with the cognitive skills for abstract thinking in that location at that time. At that is a big deal.

The research appeared recently in Antiquity.