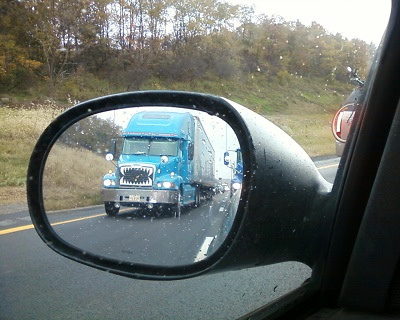 Quick: which of these things should you worry about if it's coming toward you? a.) grizzly bear b.) pedestrian c.) frowny face emoticon You many not have time to assess all the risks (is the bear running? does the frowny face have greater-than-symbol eyebrows?). But without thinking about it, you'll have a bad feeling about all of them. We have negative reactions to anything moving toward us, according to a recent study, no matter how harmless it really is. Behavioral scientists at the University of Chicago's Booth School of Business, along with colleagues at the University of Wisconsin, Madison, asked whether we feel differently about things that are moving toward us or away from us (or staying still). Previous research had shown that whether an object is near or far can affect our emotional response to it. So it makes sense that whether something's moving from one distance to another might matter too. The researchers started not with a grizzly bear or even an approaching stranger, but with letters. As in "of the alphabet." They used 32 letters from the English alphabet in a variety of fonts—they'd started with more letters, but narrowed the group down to those ranked by viewers as the most neutral. Then they showed a group of subjects, recruited via Amazon Mechanical Turk, videos in which the letters appeared to be moving toward them (growing larger on the screen), moving away (growing smaller), or stationary. After each video, subjects rated their feelings about that letter on a 7-point scale from "very negative" to "very positive." As silly as they may have felt passing judgment on a consonant or vowel, the results weren't random: letters moving closer to the subjects were rated more negatively than those moving away or staying still. Letters weren't the end of the story. The researchers next repeated the experiment with emoticons ("i.e. a face icon with two dots representing the eyes and a line representing the mouth"). Whether subjects saw a smiley face, a frowny face, or a neutral one, they felt more negatively about faces that were coming toward them. Most of us aren't approached in the street by floating punctuation marks, so the researchers moved on to a more realistic scenario: videos of a person walking toward the subject, walking away, or staying still. Again, the approaching person was rated the most negatively. Another version of the experiment used sound. Whether subjects heard the noise of footsteps or a recorded musical instrument, they felt better about sounds that were staying the same or growing fainter. Sounds growing louder, as if they were getting closer, elicited worse feelings. Then the experiments moved on to physical objects. Subjects stood at one end of a long hallway; at the other end was a wheeled cart holding a large poster for a Chinese opera. A hidden researcher wheeled the cart nearer or farther away while subjects periodically rated their feelings. As the poster rolled closer to them, subjects rated it more and more negatively (even though they'd been promised it would stop before hitting them in the face). Yet if the poster receded or stayed put, subjects' rating stayed the same over time—or even improved. No matter what stimulus researchers had used, people felt more negatively about things moving toward them. The researchers dubbed the phenomenon "approach aversion." It's easy to see why a threatening animal or stranger might make us nervous when it approaches. But it's harder to understand why we feel the same way—at least, when we're forced to describe our feelings—about clearly harmless images or inanimate objects. The researchers think it might be a case of overgeneralization. That is, a feeling that's useful in some scenarios bleeds over into anytime we need to make a quick judgment. We also may feel more powerless and less in control when something is moving toward us. None of this is useful for avoiding bears, but it might provide helpful information about interacting with other people. When we're giving presentations or lectures, moving toward the audience might hurt how we're perceived. In advertising, products that come flying toward the viewer onscreen might be a harder sell. And charging up to a stranger at a party may not be the best way to make a good impression. Even if your face is smiley.