Obamas Search for Hypoallergenic First Dog, But Does It Exist? 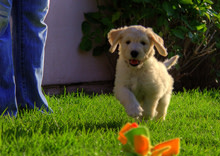 The issue of the First Dog came to national attention with Barack Obama's first press conference as President-elect, when he announced that the lucky puppy would have to be hypoallergenic due to older daughter Malia's allergies. Since then, nominations for First Dog have come from all sides, even from foreign countries: Peru has offered to send a Peruvian Hairless Dog, prized by Incan kings, to the Obamas. But all the buzz has prompted a reality check from the American Academy of Allergy Asthma & Immunology (AAAAI), which released a statement today reminding people that there is no such thing as a truly hypoallergenic dog.

Avoiding dog allergies completely may not be an option. It's a misconception that dog allergies are caused by the dog's hair. Allergies are caused by protein from the animal's dander, which can be found in dead skin cells, saliva and urine. These microscopic proteins travel through the air and are inhaled, triggering an allergic reaction in, well, quite a few people [Los Angeles Times]. Studies suggest there are about 10 million Americans who suffer from dog allergies, but sensitivity varies and some people may do fine with certain breeds that are more allergy-friendly. These breeds may produce less dander or are groomed more often to keep dander at bay. Breeds often considered allergy-friendly include

poodles, Kerry blue terriers, schnauzers, bichons and lhasa apsos. However, according to the President-elect, Malia already has her heart set on a goldendoodle, a golden retriever-poodle mix.

The adorable designer dog can be a low-shedding option if it has a poodle's coat, but if the coat favors a retriever, it could pose a problem for the eldest Obama daughter. When a dog is still a puppy, it's difficult to determine which characteristic a dog's coat will take on [Chicago Tribune].

Dr. Corinna Bowser, an asthma expert, thinks a canine in the White House may be a bad idea:

"If this was my patient ... I would say it's probably better not to get a dog" [WebMD Health News].

But it's unlikely that the President-elect will go back on the promise made to his daughters and witnessed by the whole nation. The AAAAI offers advice for minimizing dog allergies, which include keeping the dog out of the bedroom, weekly dog baths, using air filters, and switching from carpet to hardwood floors.

Allergists recommend spending time with the pet at the shelter or breeder's before bringing it home. If, for example, Malia doesn't have a reaction after being around a puppy during a lengthy visit, it's unlikely the dog will cause her problems in the future [Chicago Tribune].

There is also a fringe group that thinks the Obamas should scrap the canine campaign completely and opt for a First Cat. Related Content: 80beats: Hairless Dogs Give Up the Genetic Secret of Their Bald Glory DISCOVER: The Genetics of... Dogs Discoblog: Allergy Sufferers of the World: Don't Stress, You'll Only Make It Worse