Not Only Can Honeybees Count, They Can Also Do Math 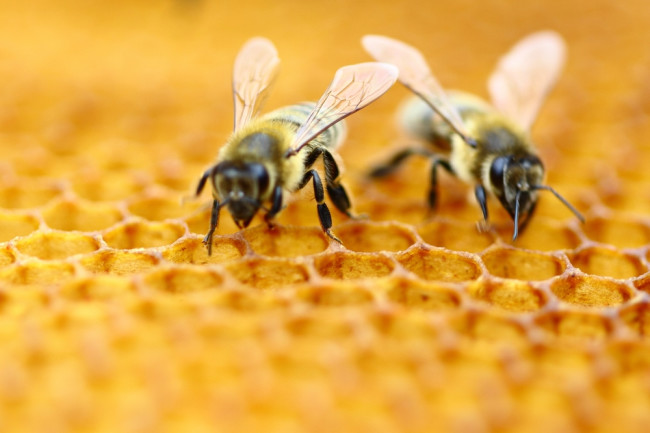 Honey bees are a great study system to learn about the animal kingdom. They dance (albeit sloppily), they make jelly that turns their larvae into queens, they have crazy tongues … I could go on. Now, researchers have found, honeybees can add.

In a paper out today in Science Advances, a team led by Adrian Dyer at RMIT University in Melbourne put the honey-makers’ arithmetic skills to the test. Instead of written numbers and symbols, they used colors to communicate with the bees. Blue for addition, yellow for subtraction, and a series of shapes to denote the numbers.

But the bees could still be simply picking the correct answer based on whether it had more or less of the shapes. So, the researchers sometimes made the incorrect choice more, and sometimes less than the correct choice. This ensured the bees had to properly add and subtract to get the answer right.

They trained the bees using a reward-punishment system: sweet sugar solution was a reward for right answers, and a solution of bitter-tasting quinine was punishment for wrong answers. They also mixed up the shapes themselves, their sizes, and which side of the maze held the correct answers, to be sure the bees weren’t picking up on some other clues besides quantity.

After 100 trials using 14 different bees, the bees’ success rate was around 60 to 75 percent. Perhaps not A+ students; but it’s a passing grade. More importantly, it’s statistically significantly higher than it would be if the bees were just flying around randomly — that would be a 50 percent success rate.

Besides being pretty neat, this opens up the idea that members of the animal kingdom have different cognitive capabilities than we once thought.

A number of animals, including honeybees, have been shown to understand concepts like less versus more or right versus left. But being able to learn a symbolic representation of a math equation, and then solve future “equations,” is another level. Only a couple of species have been shown to do any sort of addition and subtraction besides humans: mostly apes, monkeys, birds, and spiders. If honeybees can add, what else can they do?

“(There’s been) a contentious debate about whether to do math-like thinking, you need a human brain and a very advanced culture to enable that,” says Dyer. “We saw that (the honeybees) can do this task which really does inform us that to do basic arithmetic-type operations you don’t need a large brain.”

Dyer says this opens up the question of how different animals might “have a brain which can also keep a count of quantities and do some basic maths to enable their lives.”

Felicity Muth, who also studies bee cognition but was not involved in this work, says “I definitely think it’s novel and exciting research.”

“I think that it makes sense that a lot of animals should be able to tell the difference between small amounts and larger amounts, it makes sense to be able to tell different quantities of food,” says Muth. “But this is definitely more specific … It’d be interesting to know the ecological context in which bees would use this ability.” Muth is a postdoctoral researcher at the University of Nevada Reno.

One light-hearted side effect may be motivating young kids to learn their arithmetic, says Dyer. “Saying something like 1, 2, 3, you can count like a bee — it puts in their minds, well, if a bee can do it, it must be pretty easy, I can do it too.”