Not all genes are created the same 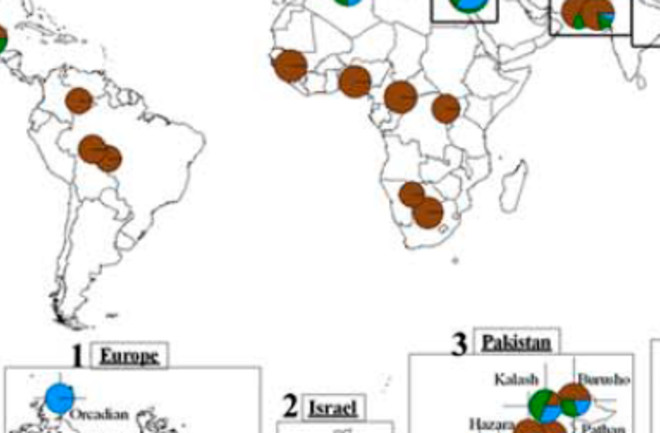 The map to the right shows the frequencies of HGDP populations on SLC45A2, which is a locus that has been implicated in skin color variation in humans. It's for the SNP rs16891982, and I yanked the figure from IrisPlex: A sensitive DNA tool for accurate prediction of blue and brown eye colour in the absence of ancestry information. Brown represents the genotype CC, green CG, and blue, GG. Europeans who have olive skin often carry the minor allele, C. While SLC24A5 is really bad at distinguishing West Eurasians from each other, SLC45A2 is better. Though both are fixed in Northern Europe, the former stays operationally fixed in frequency outside of Europe, in the Near East. As I stated earlier the proportions of the ancestral SNP in the Middle Eastern populations in the HGDP seem to be easily explained by the Sub-Saharan admixture you can find in these groups.

In contrast major SNPs in SLC45A2 are closer to disjoint between Europeans and South Asians. For example I'm a homozygote for the C allele. And yet even here we need to be careful. I want in particular to draw your attention to the frequencies in the Middle Eastern populations, the Sardinians, and the Kalash of Pakistan.

The Kalash, and their Nuristani cousins, have often been observed to have "European" physical features. These populations even trade in legends of descent from the Macedonians of Alexander. And the genetics here shows why. Though the Kalash far are more closely related to other Northwest South Asians than to Europeans, on the subset of genes which are implicated in pigmentation many of them could actually "pass" for Europeans. In fact, it is interesting to me that by these measures the Sardinians are no more European than groups like the Kalash and the Druze (in contrast to the total genome, where Sardinians may be the best reference for Western Europeans). They have a lower frequency of the SNP strongly associated with blue eyes than either of these groups, for example.

In the above paper they also produced a chart which illustrated the relationships of HGDP populations as a measure only of the six SNPs they used in their prediction method. These are markers which distinguish blue and brown eye color in Europeans efficiently.

As you can see the largest dimension is basically a cline of "Northern Europeness." This is entirely understandable, a small number of SNPs were ascertained to be useful in distinguishing European traits. Who is surprised that Europeans are found all over the chart? The second dimension seems to be a reflection of the "Out-of-Africa" demographic pulse, but the first dimension which is defined by the "Europe-cline" is different. But how it is different has to be handled with care. It seems very likely that natural selection is one of the reasons that Europeans are very light-skinned (a model of functional relaxation of constraint does not explain the frequency spectrum). But, are current variations in these alleles a function of subsequent admixture between populations, or, are they due to the spread of favored alleles? Or, are they a combination of both? I'm betting on the last, but what's the mix of factors? I guess that's a "future direction."