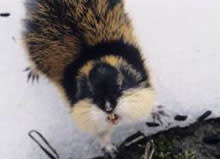 Warmer winters in Norway seem to be causing a decline in lemming populations, according to a new study, and researchers say the decline of the rodent is having a cascading effect. Lemming predators, like foxes and owls, have been forced to hunt different prey in what researchers call a clear-cut example of how global warming can have a disruptive impact on entire ecosystems.

Lemming populations throughout Scandinavia tend to explode naturally every three to five years, causing huge numbers to go in search of food. Occasionally this leads the rodents to jump into water and swim to new pastures new—the origin of the myth that lemmings commit mass suicide. When lemmings boom, they're hard to miss. Norwegians have had to use snowplows to clear the squashed rodents off the roads [National Geographic News].

But the study of lemming populations during the last four decades found no population explosions since 1994. Norway lemmings, Lemmus lemmus, don't hibernate during the winter, but instead live in nests underneath the snow.

When the snowpack is light and fluffy, warmth from the ground melts small spaces under the snow that the lemmings use to forage for sedges, grasses and mosses without being exposed to predators. But in recent years, warmer winter temperatures have rendered the snow less fluffy. That, in turn, has made the snow more likely to melt and refreeze at ground level, coating the ground with ice and making life more difficult for lemmings [Science News].

With these tough conditions becoming the norm, fewer lemmings are surviving the winter, reducing the possibility of population explosions in the spring. Researchers say lemmings aren't close to being considered an endangered species, but note that the rodents are an important part of the local food chain. In the study, published in Nature [subscription required], researchers say that the lemming's traditional predators, arctic foxes and snowy owls, have begun hunting other species instead, including ground-nesting birds such as ptarmigan and grouse; populations of those birds is now declining as a result.

Temperatures in late winter and early spring in southeastern Norway in recent decades were the highest since records began in 1756. The U.N. Climate Panel projects that temperatures will keep rising, bringing more droughts, floods and heatwaves. Man-made emissions of greenhouse gases, mainly from burning fossil fuels, are the main cause, it says. [Reuters].

Planet EarthJust How Intelligent Are Dolphins?
Recommendations From Our Store