Non-Slip Cells on Flower Petals Help Bees Get a Grip 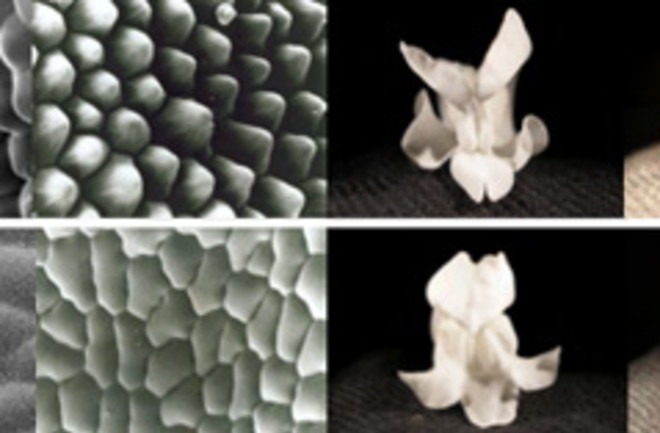 Specialized cells found only on flower petals have the same basic function as nonslip mats that prevent people from slipping in the shower, a new study has determined. The bumpy cells, called conical cells, help bees come in for a landing on the flower petals and find their footing, so they can get down to the important business of pollination. Conical cells had been something of a botanical mystery, with most researchers assuming they played a visual role. One

hypothesis held that by modifying the spectral properties of the petal, the cells enabled the plant to appear brighter to pollinators [The Scientist].

In the study, will be published in a forthcoming issue of Current Biology, researchers showed that the conical cells' main function is to provide friction, and that bees can detect them by touch. The first experiment used two kinds white snapdragons that looked identical to both human and bee eyes, but one was a mutant with flat cells instead of conical. The bees initially went to both flower types, but after 20 visits they chose the blossoms with conical cells more than 80 percent of the time. To take it another step, study coauthor Heather Whitney

created "biomimetic epoxy casts" that imitated the surface of conical and flat-celled flowers in remarkable detail. These casts allowed her to study the effect of texture, devoid of the confusing influences of colour, smell or any other floral cue. After several visits, bees learned to choose the bumpier surface with almost perfect accuracy - strong proof that the feel of a flower's petal is part of its attraction [Not Exactly Rocket Science].

The researchers also investigated how bees responded to two strains of pink snapdragons: one with conical cells and rich magenta flowers, and the other with flat cells that reflect more white light, which therefore has paler pink flowers. Study coauthor Beverley Glover explains that that this visual cue allows bees to avoid the slippery flowers--but they don't always choose to. When both blossoms were laid out horizontally, bees crawled onto the two types equally often. But when the flowers were presented vertically, the bees visited the magenta flowers significantly more often,

suggesting that they only prefer the conical cells when it is difficult to land on the flower. When the flower is vertical, Glover said, it's not very energetically efficient for bees to feed on the flat-celled flowers. "Their legs are scrambling as they do it, and their wings keep beating...like a mountain climber trying to find a hold on a vertical mountain side" [The Scientist].