"No Oxygen? No Problem!" Says Squid That Can Shut Down Its Metabolism 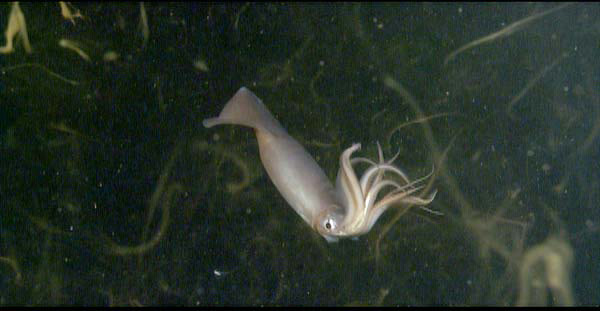 If you've ever described your daily routine as leaving a comfortable place and going somewhere nearly incompatible with life, you were probably exaggerating how bad your job is. A Humboldt squid wouldn't be exaggerating. It spends its days in areas of the ocean with what should be fatally low oxygen levels. To survive, it cranks down its metabolism. Scientists are now beginning to understand how it pulls off this trick, which is more impressive than fixing the office printer. Dosidicus gigas, the Humboldt squid, is also called the "jumbo squid" for reasons that are obvious if you're face-to-face with one. Individuals can be six feet long. They're aggressive hunters that sometimes attack divers and can turn bright red when provoked. They reside in the Eastern Pacific, where they make a daily vertical commute: they spend nights hunting near the surface, and during the day they sink 300 meters or so. The Humboldt squid's range also overlaps closely with an area called an oxygen minimum zone, or OMZ. Here, thanks to quirks in the circulation of ocean waters, lower depths have almost no oxygen—as little as 5% of the amount near the surface. "Once it had been shown that [Dosidicus gigas] migrates every day into the oxygen minimum zone, we knew that it must be shutting down metabolism," says Brad Seibel, a biologist at the University of Rhode Island. Studies confirmed this: when the squid reaches a low-oxygen environment, it dials down its energy use. By lowering the amount of fuel it's burning, the squid reduces the oxygen it needs to drive the process. In a new study, Seibel and his colleagues pulled Humboldt squid out of the ocean and held them in tanks of normal or low-oxygen water for up to three and a quarter hours. Then they carved up the squid and scrutinized their tissues to see what was happening on a molecular level. They saw that when spending time without oxygen, squid shut down the energy-demanding processes of activating genes and using them to build new proteins. Other animals that can survive in low oxygen do the same thing, Seibel says. But the "new horizon" in this research, he adds, may be epigenetics—the way DNA is packaged and stored inside cells, which can affect how genes are used. In the Humboldt squid, changes to histones—proteins that spool DNA for tighter storage—seemed to be crucial to its adjustment to low oxygen. The result of these changes was that adult squid cut their energy use by almost a third in low-oxygen water, and juveniles by more than half. This is their secret to lasting in the OMZ for hours at a time. If we were similarly deprived of oxygen, our cells' energy stores would disappear in minutes. Seibel says how the squid cut their energy use isn't as impressive as the fact that they can do it at all. "Most marine animals that are known to suppress metabolism are fairly sluggish" to begin with, he says. But "Dosidicus gigas has one of the highest rates of metabolism among animals, so it is surprising that it can so easily shut it down every day." Why bother? Vertical migration, Seibel says, is usually about hiding from predators. Small creatures may travel to deeper, darker waters during the day to make themselves less visible; the Humboldt squid's prey do this. "Intuitively, you might think the squids are migrating so that they can continue to feed day and night," Seibel says. But that's not the case; their slowed metabolisms in the OMZ seem to make them too sluggish to hunt. Instead, squid may sink into oxygen-deprived waters just so they can shut down their metabolisms while they wait for prey to return to shallower depths. Their metabolisms are ordinarily too high to spend the day without food, but dropping into the OMZ tides them over until dinner. Between low temperatures, little activity, and slowed fuel use, squid in the OMZ might spend energy at one-tenth their usual rate. This trick may give Humboldt squid an advantage over competitors that need to stay in warm, shallow waters all day. And it may give them a further advantage as climate change makes oxygen minimum zones larger, Seibel writes. In fact, the Humboldt squid's range has been expanding lately. The daily grind is rough, but it seems to be working.