No, NASA Isn't Going to Drill to Stop Yellowstone from Erupting 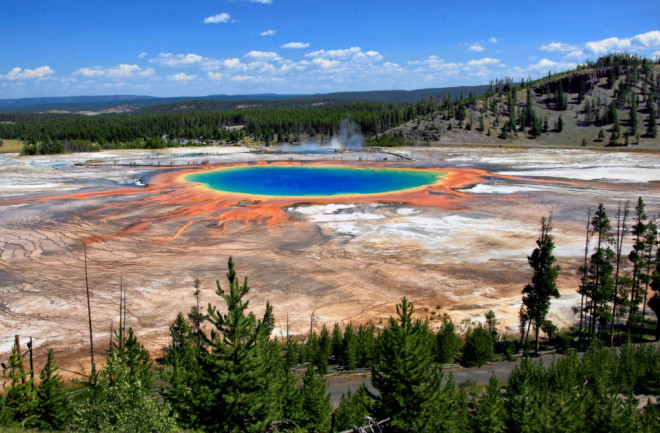 Grand Prismatic Spring, one of the geothermal features of the Yellowstone Caldera. (Credit: Brocken Inaglory/Wikimedia CC-by-SA 3.0)

Let’s cut to the chase: The purported NASA plan to “defuse” Yellowstone is pure science fiction.

OK, now that we have that out of the way, let’s get into the details of the numerous articles that have jumped all over what might best be termed a “thought experiment” by scientists at NASA. Yellowstone, the massive caldera in the middle of North America, is definitely a volcanic threat. Is it a high volcanic threat? Not as much as other, much more active volcanoes in the United States. However, it has produced some really massive eruptions in its history—well, three times in its history dating back to ~2.1 million years ago.

There have also been many more small eruptions over that time period, which is much more typical of activity at the restless caldera. Basalt and rhyolite lava flows and domes have occurred frequently and the most recent activity at the Yellowstone caldera was relatively small rhyolite dome eruptions about ~70,000 years ago.

Those big eruptions—the Lava Creek at ~640,000 years ago, the Mesa Falls at ~1.3 million years ago and the Huckleberry Ridge at ~2.1 million years ago—were huge. The Huckleberry Ridge tuff was the largest of these explosive eruptions, producing over 2,400 cubic kilometers of volcanic debris that spread over much of the continent. How big is 2,400 cubic kilometers? That’s about the same as filling and emptying Lake Erie five times!

Yet, although the caldera has these massive eruptions, the likelihood of such an eruption is very low. They are such uncommon events that we don’t even know if they happen with any cyclicality. A pattern defined by three points is not one you want to hang your hat on, but that is what we have at Yellowstone.

There are no signs right now that Yellowstone could be heading to any sort of gigantic eruption—in fact, there is little sign of any time of eruption. Sure, there are all the noises of a “restless caldera” such as the hot springs, geysers, ground deformation, earthquakes, but in a place where we know there is some amount of partially molten magmatic goo down there, this is to be expected. However, there is little evidence that that magma is in a state that could erupt, and it’s likely the process to make it eruptable would take much longer than a human lifetime to transpire. If you read otherwise, unless it is from the US Geological Survey, be skeptical.

So, why is NASA worried? I don’t think they actually are (and if you look at the article that started this on the BBC, you’ll see exactly that). Rather, just like pondering what to do about a potential asteroid impact, they wanted to consider if anything could be done if Yellowstone started to show signs of a massive eruption. Really, the short answer is no, you can’t do anything, at least with our current technology and understanding. However, being scientists, they speculated and considered a number of options: (1) releasing pressure and (2) cooling the magma.

That’s where we get into science fiction realms. The magma at Yellowstone is stored at depths of at least ~8-10 kilometers (over 5 miles). If you want to drill into it to release pressure or pump water, you would need to drill that deep and right now, our deepest drill holes just barely make it that deep with holes that are less than a foot across. So, to a magma body holding thousands of cubic kilometers of magma, that’s like the tiniest pin prick.

We aren’t even close to the technology to do this easily in a volcanically unstable area. A massive eruption would have profound climate impacts for decades, but note: There are no identified mass extinctions related to giant Yellowstone eruptions. Even during the Toba eruption in Indonesia ~74,000 years ago (the last truly massive eruption), humans survived the local and global impacts of such a blast.

Second, the volume of water needed to cool such a large magma body would be enormous. Where would the water come from? Literally, you would need to pump the volume of a Great Lake into the magmatic system to even make a dent. Again, science fiction (and a resource impossibility at this point). And even if we did have the water, there is likely as great a chance that the water could make the eruption worse. The heightened explosively of the 2010 eruption of Eyjafjallajökull in Iceland was caused by the addition of water (from melting ice), so unless you get the balance just right, you can make the eruption more violent rather than quench it.

Now, the NASA “plan” tries to get around that problem by circulating water to keep things cool. This is something like your car’s radiator, which moves heat out by sending coolant around the engine and bringing it to the front to cool down again. However, this assumes that no new heat is being added, such as new magma from deep below that would be fueling the potential eruption. In the short-term, we might get one heck of a geothermal power plant, but in the end, it would likely not be enough.

When all is said and done, a massive eruption at Yellowstone, or any other caldera for that matter, isn’t a question we should answer by trying to stop it. Instead, we need to build resilience into our society to survive after such an event. This means things like seed vaults, international agreements to evacuate and emigrate volcanic refugees, water protection measures. A lot less sexy than, “Let’s pump water into a magma chamber!” but the sort of stuff that helps ensure survival rather than trying to hit the mid-court (if your basket is, say, in the orbit of Mars) shot.

So, sure, we can come up with plans that are akin to Bruce Willis flying shuttles to asteroids to save the planet. In reality, there is almost no chance that we will need to deal with a massive Yellowstone eruption and if we did, there’s an even smaller chance we would ever employ such a plan to “stop” the eruption. NASA isn’t going to start drilling. It is a fun science fiction short story where we somehow make the eruption worse, but it isn’t any sort of real plan to save the planet from Yellowstone.