No Mitochondria Machinery? No Problem

A protozoan that lacks the genes associated with all mitochondrial functions. 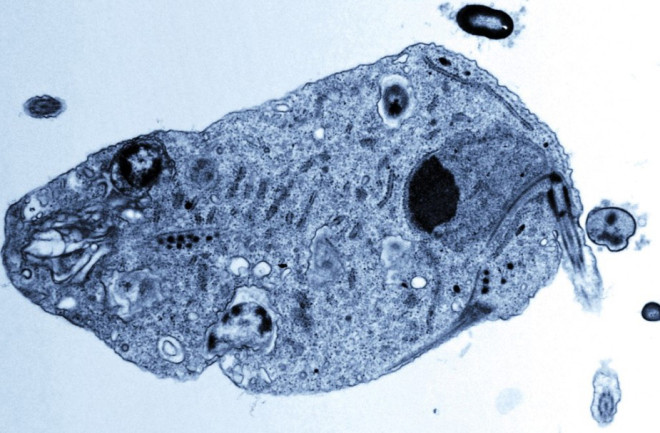 The protozoan Monocercomonoides lacks the genes that are associated with all mitochondrial functions. | Biotechnology and Biomedicine Center of the Academy of Sciences/Charles University in Vestec

Imagine a car that runs minus not only an engine, but without most parts under the hood. A team of Czech Republic and Canadian scientists identified the cellular equivalent in Monocercomonoides, a protozoan they isolated from a chinchilla’s gut. This is the first eukaryote — organisms, like plants and animals, whose cells contain distinct nuclei — found without the machinery of mitochondria.

These cellular powerhouses can perform many jobs. Mitochondria produce energy, and they glom onto iron and sulfur to help proteins make needed chemicals. A few related pathogens have simpler mitochondria that only perform the iron-clustering duty. When the team analyzed the Monocercomonoides genome, genes associated with all mitochondrial functions were missing.

So how does the organism survive? “It stole or borrowed clustering systems from bacteria,” says Anna Karnkowska, now at the University of British Columbia in Vancouver. The work was published in the journal Current Biology in May.

The rarity of this exception confirms mitochondria’s importance, Karnkowska says, adding that next up is searching for evidence in close relatives that shows how mitochondria were completely lost.