Ninja bat whispers to sneak up on moths

Batman's logo became a lot more detailed over the years...

The night sky is the setting for an arms race that has been going on for millions of years: a conflict between bats and moths. Many bats can find their prey by giving off high-pitched squeaks and listening out for the echoes that return. This ability – echolocation

– allows them to hunt night-flying insects like moths, which they skilfully pluck out of the air. But moths have developed countermeasures; some have evolved ears that allow them to hear the calls of a hunting bat and take evasive action. And bats, in turn, have adapted to overcome this defence. Holger Goerlitz from the University of Bristol has found that the barbastelle bat

is a stealth killer that specialises in eating moths with ears. Its echolocation calls are 10 to 100 times quieter than those of other moth-hunting bats and these whispers allow it to sneak up on its prey. It’s the latest move in an ongoing evolutionary dogfight and for now, the barbastelle has the upper wing. Working with Goerlitz, Matt Zeale and Gareth Jones collected faeces from 51 barbastelles and analysed the DNA within them to work out what the bat eats. To his surprise, he found that it specialises almost entirely on eared moths, which make up around 90% of its menu. For comparison, moths (not just eared ones) only account for 10% of the diet of Leisler’s bat

, which has a similar size, foraging habits and call frequency. It feeds mostly on flies. The team wanted to find out how the barbastelle catches its sensitive prey but they also wanted to study them in wild conditions. To that end, Hannah ter Hofstede set up elaborate natural laboratories where imprisoned moths were fitted with electrodes that measured the activity of neurons in their ears. Bats flew around the cages (without attacking the moths) and a circle of four microphones recorded their calls. Through this intricate set-up, Goerlitz could record what the bats were saying and what the moths were hearing as they drew near. Moth ears have two neurons that pick up bat echolocation and trigger different reactions: A1 makes the moth change direction; and A2 triggers an erratic, last-minute evasive manoeuvre. As a Liesler’s bat approached the tethered moth, A1 fired when it was 33 metres away, and A2 fired when it was 19 metres away. That gives the moth a leisurely three seconds to evade the incoming threat. But when a barbastelle approached, A1 only went off at 3.5 metres and A2 only fired at 1.8 metres. At that point, contact is less than half a second away, and any dodging probably comes too late. The recordings also revealed the secret of the barbastelle’s sneaky approach: it whispers. Bats calls are incredibly loud; the calls are far too high-pitched for us to hear but the noisiest species are as loud as a jackhammer or a jet engine to us. Such screams are a dead giveaway to any moth that can actually hear them, but the barbastelle’s calls are 10 to 100 times softer. Its hearing is also very sensitive, so it almost always hears the echoes from the moth before the evasive A2 neuron picks up its calls, and sometimes even before A1 catches on. 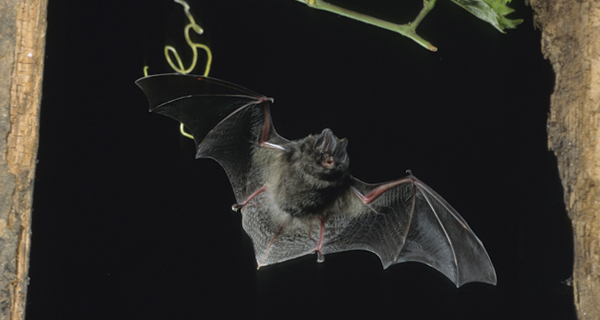 This strategy isn’t without its costs. A quieter call means that the barbastelle can’t detect moths from as great a distance as more thunderous species. Leisler’s bat can spot moths at up to 15 metres; the barbastelle has a maximum range of just five. This drawback suggests that the whispers of the barbastelle are a direct countermeasure against the ears of moths; the difficulty of actually finding a meal is outweighed by the benefits of actually catching one. The barbastelle’s ninja-like behaviour gives it a major advantage in the bat-moth arms race, and allows it to exploit a source of food that other bats can’t touch. The moths may well come up with a countermeasure of their own but Goerlitz suggests that they are unlikely to do so by evolving more sensitive ears. If they start responding to every soft, innocuous sound, they might be permanently on alert and miss out on important feeding or mating opportunities. For now, he thinks that the threat of sneaky barbastelles isn’t severe enough to demand a countermeasure – the so-called “rare enemy effect”. But this line of thinking assumes that moths will counter stealthy bats by becoming more sensitive. In fact, there are many ways in which they could win back the advantage. Some species jam the sonar of bats

with clicks of their own, causing their attackers to fumble their approach at the last minute. Others fool bats by mimicking the sounds of distasteful species

. They have a whole arsenal of potential countermeasures available to them, including some that we’ve doubtlessly failed to think of yet. Evolution, after all, is cleverer than you

PS Of course, not all bats are as stealthy as the barbastrelle

, More on bats and moths: