Bats view the world in echoes, timing the reflections of their own ultrasonic calls to navigate and hunt. This biological sonar, or echolocation, has made them masters of the night sky; it's so sensitive that some species take moths and other insects on the wing, while others pluck spiders from their webswithout entangling themselves in silk. But with such an efficient technology, it was only a matter of time before their quarry developed countermeasures. 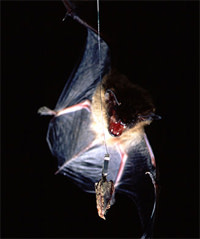 Some insects gained ears; others simply rely on outmanoeuvring their attackers. But one group, the tiger moths, play bats at their own game. When attacked, they unleash ultrasonic clicks of their own to jam the calls of their pursuers, disrupting their ability to accurately gauge distances or even feigning echoes off non-existent objects.

This technique has been suggested ever since moths were first discovered to click several decades ago, but Aaron Corcoran from Wake Forest University has found the first conclusive evidence that moths actually do this. They pitted moths of the species Bertholdia trigon) against four big brown bats (Eptesicus fuscus) against each other over the course of three days, in gladiatorial arenas surveyed by high-speed infrared cameras and ultrasonic microphones.

When the three bats were pitted against moths in flight, they only managed to snag B.trigona on around one in five attempts. Even if the moths were tethered onto a stump, the bats still fumbled their approach at the last minute. A related moth species that doesn't click fared much worse and almost always succumbed to the bats.

Tiger moths make their clicks using an organ called a tymbal, and by cutting this away, Corcoran managed offer muted individuals to the bats. Deprived of their organic castanets, the vast majority of moths were eaten, proving that the clicks were the cause behind the bats' failure. That also rules out the possibility that the clicks advertise the fact that the moths are unpalatable or poisonous, for the bats were all to happy to munch away on their silenced prey. Indeed, after the moths start clicking, the bats carry on with their attack - they just fail to actually close the deal. That too suggests that the clicks aren't off-putting in themselves.

Over the course of a week, the bats didn't become any worse or any better at capturing clicking moths. This implies that they don't need to learn anything about the defence, which again rules out the idea that the noises advertise a poor taste. It also rules out the idea that the clicks are meant to startle approaching bats, for experienced animals would soon become accustomed to that and learn to carry through with the chase. That didn't happen, even if it was the same moth and the bats were having another shot, seconds after a failed attempt

The only remaining possibility is that the bats were jamming the bats - it's the sort of defence that is neither enhanced nor diminished by experience on the part of the bat, which is exactly what the data showed. The bats' behaviour also supported this theory. When they take other moths, their attack follows a regular pattern - approach the target, track its movements, and swoop in for the kill, all accompanied by their own distinct style of sonar pulse. But bats attacking clicking moths become confused, going back and forth along their chain of attack.

It's clear that not all species of tiger moths click to jam bat sonar, and Corcoran suggests that originally, the noises did evolve to signal a foul taste. Indeed, some moths mimic each others' sounds to fool hungry bats. That, however, was a relatively simple defence and one that could be easily penetrated through experience. It was a stepping-stone to the more sophisticated jamming technique, the latest countermeasure in the arms race between bat and moth. 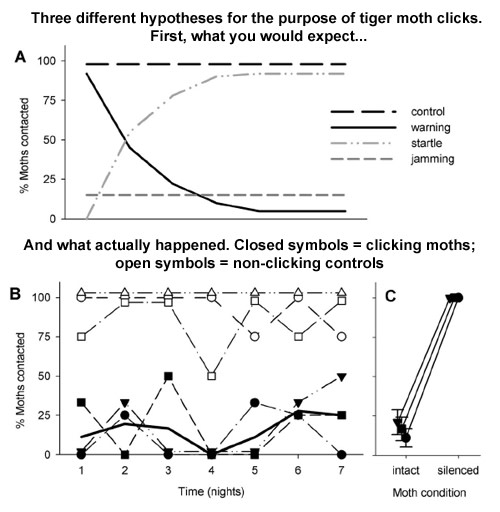 More on bats and moths: Moths mimic each others' sounds to fool hungry bats