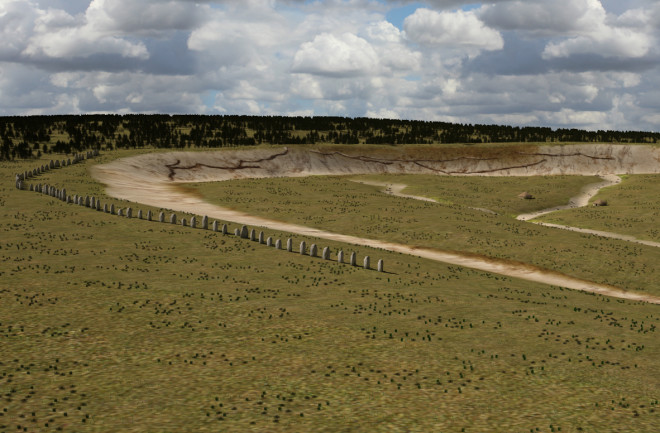 An illustration of what the newly discovered row of stones would've looked like above ground. (Credit: LBI ArchPro, Juan Torrejón Valdelomar, Joachim Brandtner) It’s hard to fathom, but Stonehenge, one of the world’s most iconic wonders, is really just the figurative opening act to a much larger show. Five years ago, researchers from the University of Bradford starting probing the dirt of the Stonehenge World Heritage Site in Wiltshire, England, with remote-sensing instruments to build a map of what’s buried beneath. The Stonehenge Hidden Landscapes Project has already revealed hundreds of previously unidentified ancient features underfoot, and on Monday the team announced another: a super-sized version of Stonehenge buried just 2 miles away from the iconic ancient site.

Researchers with the Hidden Landscapes Project hitch ground-penetrating radar devices to trailers towed by four-wheelers and tractors. As team members drive slowly over the fields near Stonehenge, their devices beam electromagnetic signals into the soil, which subsequently bounce back. Researchers can then determine if there’s something buried under the soil based on patterns in the returning signal. The instruments are so advanced that it’s possible to construct a 3-D image of what’s buried underground based on the signal.

Using this method, the Hidden Landscapes team now have found a row of roughly 90 standing stones, some that were originally 15 feet tall, buried near Durrington Walls just two miles from Stonehenge. In case you aren’t familiar, the Durrington Walls site is a C-shaped, man-made earthen berm constructed some 4,500 years ago — a century after Stonehenge — which is nearly one mile wide. Researchers believe Durrington Walls may have housed one of the largest Neolithic settlements in Europe.

The stones were found beneath three feet of soil and lying on their sides. Researchers believe the line of stones was built around the same time as Stonehenge, and builders may have knocked them over when the Durrington Walls went up nearly a century later.

A map of new monuments discovered during the Stonehenge Hidden Landscapes Project. (Credit: LBI ArchPro, Juan Torrejón Valdelomar, Joachim Brandtner) The line of stones is just the latest in a line of discoveries from the Hidden Landscapes team. Nearly one year ago to the day, the same team announced the discovery of hundreds of new features buried on the Stonehenge World Heritage Site, including 17 circular stone monuments, burial mounds, and a wooden building used to prepare the dead for burial. After 4,600 years, Stonehenge is still proving that, at least in Wiltshire, there’s more than meets the eye.