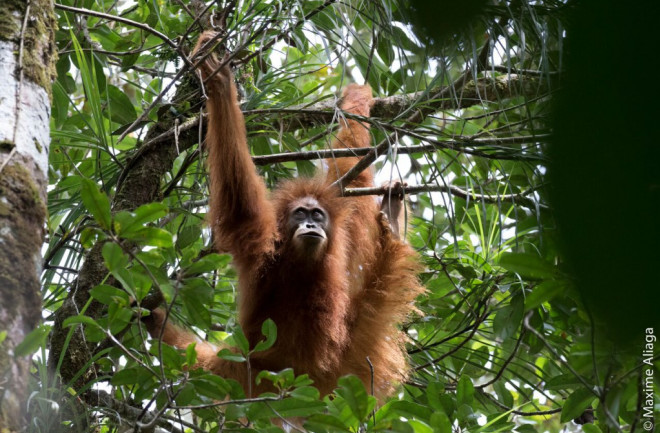 We found you Tapanuli orangutan! (Credit: Maxime Aliaga) A newly discovered species of orangutan is already teetering on the edge of extinction. The Tapanuli orangutans (Pongo tapanuliensis) have been identified as the most endangered great ape species in the world, consisting of less than 800 individuals. That population size is strikingly different from the two other known species of orangutans. There are an estimated 14,000 Sumatran orangutans (Pongo abelii) and 100,000 Bornean orangutans (Pongo pygmaeus) currently living in the Indonesian rainforest—both are considered critically endangered. The new orangutan family member is described in a paper published Thursday in Current Biology.

What Large Teeth You Have

“I think it’s pretty amazing to describe a new great ape species; there’s only seven that have ever been defined, so this is not something that happens all the time,” says Michael Krützen, an anthropologist at the University of Zurich who participated in the study. The research team first suspected that another species of orangutan could exist when they began tracing the evolution of all current living orangutans. “We decided to look at genomic DNA, which would allow us to probe back in time to see what really happened in the past with these orangutan populations,” Krützen explains. “Once we did this, we realized there are three deep, independent evolutionary lines among orangutans and it was very interesting because we had only two species described [at the time].” Krützen and his team confirmed their findings after working with an international team of anthropologists who studied orangutan skeletons. One skeleton of a male orangutan from Batang Toru Sumatra stood out. It had distinct features from other known species of orangutans, including large upper teeth and a shallower face depth. In the wild, these same orangutans had unique mating calls that could last up to twice as long as others.

This orangutan skull has large upper teeth and a shallow face, which differs from the two previously known species. (Credit: Matthew G. Nowak) What may be most exciting, Krützen says, is that the Tapanuli orangutan may be the direct descendant of the first orangutan species that migrated from Asia to Sumatra. Extensive computer modeling suggests that more than 3 million years ago, the Tapanuli population split in Sumatra, leading to the creation of the Sumatran species. Then, about 670,000 years ago, the Sumatran species split, creating the Bornean species. More studies are needed to learn what led to these splits and how the orangutans became geographically isolated from each other. In the meantime, conservation of the Tapanuli orangutan is key. Matthew Nowak, an anthropologist at the Sumatran Orangutan Conservation Programme, says the species is currently fragmented across three forest areas. “For the species to be viable into the future, the three forest fragments need to be reconnected via forest corridors,” he says. But there are big barriers. The Tapanuli’s already small habitat range, some 380 square miles, is threatened by increasing habitat conversion for roads, agriculture, mining, geothermal development and hydro-electric development. Top that with a culture that’s known to hunt and poach orangutans, and the new species’ future looks pretty bleak. “If steps are not taken quickly to reduce current and future threats and to conserve every last remaining bit of forest, a great ape species may become extinct within a few decades,” Nowak says. Krützen hopes it doesn’t come to that: “Great apes are our closest relatives; we need to conserve them.”