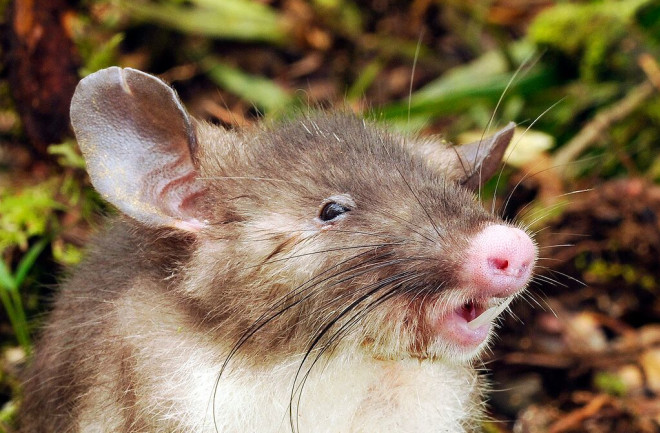 Mett the hog-nosed rat. (Credit: Kevin C. Rowe, Senior Curator of Mammals, Museum Victoria) A recently discovered rat has a face only a mother could love. An international team of researchers studying animals in the isolated, mountainous island of Sulawesi, Indonesia, trapped a shrewlike critter with a distinctive pink snout on Mount Dako in 2013. As it turns out, the critter was previously unknown to science, and the team finally introduced the rest of the world to the newly discovered hog-nosed rat, Hyorhinomys stuempkei.One of a Kind As scientists worked to describe the rat, they quickly discovered it was significantly different from other rat and shrew species. In fact, genetically speaking, the hog-nosed rat was so unique that scientists described it as an entirely new genus. And on the surface, H. stuempkei stands out from other rodents. Apart from its distinctive piglike nose, the hog-nosed rat also sports longer front teeth. It has extremely large ears and long hind legs that it uses for hopping. Both male and female hog-nosed rats also grow unusually long, whiskerlike pubic hairs, but scientists aren’t sure why the hairs grow to such lengths. [embed]https://www.youtube.com/watch?v=gZPUDUKuCNI[/embed] “It probably helps it in some kind of reproductive way,” Kevin Rowe, mammalogist and research team member, told Mashable. “They’re not like human pubic hairs.” Hog-nosed rats are also missing a jaw muscle attachment, the coronoid process, commonly found in most other mammals. In other words, hog-nosed rats have weak jaws, so their diet consists of soft prey, such as earthworms and beetle larvae. The research team published its findings in the Journal of Mammology. More to Come? The hog-nosed rat is the third new rodent genus described by this group of scientists since 2012, and there will probably be more. Sulawesi is rugged and continually drenched with rain, making it a difficult place to conduct research. The hog-nosed rat, for example, was discovered on Mount Dako at an elevation of 5,200 feet, a two-day hike from the nearest village. Rowe says they expect to discover more new species as they continue studying biodiversity in Sulawesi. We’re looking forward to seeing what other new species this remote Indonesian island has to offer.