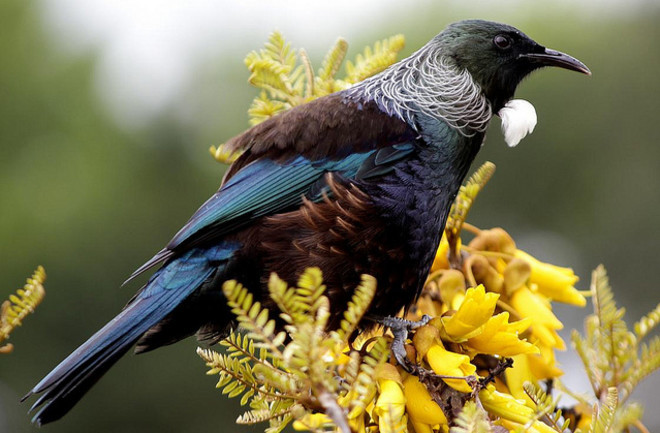 A New Zealand tui (Credit: Auckland Photo News) Birds are territorial creatures, and they'll passionately defend their chosen area from unwanted intrusions. For some songbirds, it doesn't even take a physical breach to draw their ire — if you're a lovely singer, they'll attack. New Zealand's tui songbirds certainly aren't doing the "jealous performer" stereotype any good. Males of the species will fend off rival males encroaching on their territory, and they're especially aggressive toward those with more intricate, some might say prettier, songs.

In the avian world, a bird's song can be a measure of its physical fitness, as maintaining the complex vocal maneuvers that enable birdsong takes a lot of energy. Birds that sing longer and with more variation in "syllables" are perceived to be more desirable mates. So, if another bird happens to be a better singer, he stands a good chance of stealing the eligible females in the area. When you're outclassed like that, sometimes you have to get dirty. Researchers from New Zealand's Massey University played different kinds of tui songs near 12 different males, and found that the more complex songs elicited more aggressive responses from the birds. They flew over quicker and got closer to the speaker when the songs were long and complex, and even responded with more elaborate songs of their own. While the behavior hasn't been directly tested with actual birds singing the songs, there's evidence from studies of other songbirds that males singing more complicated songs have a better chance of mating. In a study published in the International Journal of Avian Science, researchers say their experiment hints at the same behavior, in addition to uncovering a new kind of aggressive response. You know what they say: "If you can't beat 'em ... beat 'em up."