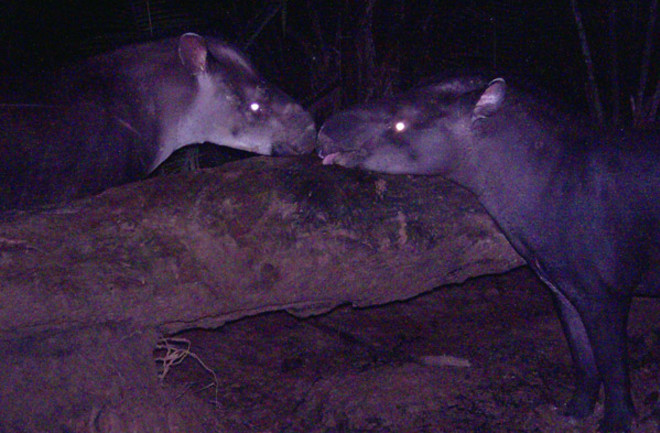 This magical moment between a pair of Kobomani tapirs was caught on camera trap in the southwest Amazon. Photo courtesy of Fabrício R. Santos. It may seem hard for a 250-pound animal to elude scientists, but a species of tapir managed to do just that for hundreds of years. Now details of the new, miniature tapir that lives in the Amazon rainforest are finally being brought to light. Tapirs are elusive, friendly and mostly nocturnal. Since 1865, there have been four known species of tapir---one in Asia and three in Central and South America. This new find is number five. The tapir species is new to science, but has been known to and hunted by tribes in the Amazon rainforests of Colombia and Brazil for millennia. Researchers tipped their hat to this fact in their selection of a species name, Tapirus kabomani, which means tapir in the local Paumari language.

A Case of Mistaken Identity

Historically, scientists assumed the indigenous hunters were mistaken in their identification. As they describe in their paper [pdf] published in the Journal of Mammology,

It is noteworthy that the 1st known specimen collected for this species remained unidentiﬁed for almost 100 years although the collector, Theodore Roosevelt, remarked that this specimen ‘‘...was a bull, full grown but very much smaller than the animal I had killed. The hunters said that this was a distinct kind.’’ Roosevelt sent the specimen to the United States for analysis, but it was considered just a variation of T. terrestris, [the Brazilian tapir].

Weighing in at about 240 pounds, the Kabomani tapir is a third the size of its closest relative, the Brazilian tapir (which averages more than 700 pounds). The new tapir also sports darker hair, hence the locals' nickname for it: "little black tapir."

According to a report from Mongabay.com, paleontologist Mario Cozzuol found the first evidence of the new species ten years ago while examining tapir skulls that didn't fit the criteria of other local species. In the ten years since, researchers have been collecting DNA samples and skulls from local hunters and the Karitiana Indians. Genetic research indicates that tapirs haven't changed much since they first emerged 50 million years ago, and that the new species branched off from the other South American species some 300,000 years ago. All species of tapir are currently threatened with extinction, and this new guy is likely no exception as overhunting and deforestation in the Amazon continue. And it begs the question: How many of the rainforest's species will be lost before scientists even know they're there?